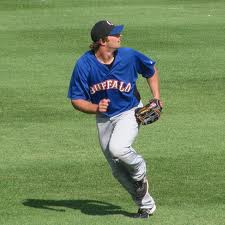 Drafted by the New York Mets in the 3rd round of the 2008 MLB June Amateur Draft.  The Mets are expected to recall Kirk Nieuwenhuis today to replace the injured Andres Torres (calf) on the active roster.

What’s To Like:  There are lots of things to like about Captain Kirk.  One is that he’s a big guy with some power who still generates enough speed and range to hold his own in center field.  He might not ever hit more than 20 HRs or steal over 20 bases but the combination is plenty to feel good about.  The other two key positives are his contact which has been a steady feather in his cap since 2008 (his first year in the Met system) and his eye which is solid and contributes to above average OBP numbers.

What’s Not To Like:  Scouts point to his body and question his longevity in center.  When you compare him to players like Matt Den Dekker and Darrell Ceciliani, there is no question he’s the weakest defensively.  That isn’t to say he can’t cut muster at the position and provide more than enough pop to survive in the bigs… at least until someone else were ready.  He was on a roll in 2011 and has picked up with 2 walks in 2012 but his history does give you pause in relation to his swing and miss numbers.  He could easily right that ship and get his numbers back up where they belong.  The last chink in the armor is health.  He was injured for a lot of 2011 and spent time on the shelf this spring as well so we need to be cautious with a player who might be a little on the fragile side.

2012: This is Kirk’s year.  Andres Torres has the starting job but Kirk can do a lot to earn a place as a Met regular in the next two weeks.  Mets could look to platoon him with Bay or even install him as the everyday guy in center with Torres being the super-sub in the OF.  While he doesn’t project as a leadoff hitter long-term, I think he’s equipped for the role in the short-term.