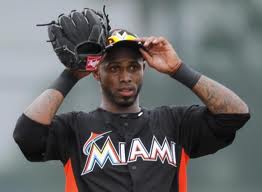 There’s no question Jose Reyes was one of the greatest players in Mets franchise history. He’s the all-time leader in stolen bases, runs, triples, and second in hits and at-bats. He played for nine seasons in New York and provided a spark and energy that no other player in the game brought to the table. The Mets and Reyes parted ways last Winter, as he took his talents to South Beach and signed with the division rival Marlins. For me, I felt like Reyes wanted to stay, but the front office didn’t have the money, nor faith in his ability to stay on the field.

Reyes will make his return to Queens on Tuesday, but will look much different than what Mets fans remember. Aside from missing his signature dreads, he’ll be sporting the vibrant Miami Marlins uniform. He will be playing his first ever game in Queens as a visiting player and a rival. The Mets have chosen to honor Reyes career in New York before the game.

Many fans have a problem honoring a player in a rival uniform. He is the enemy now, and any sort of respect or gratitude the Mets want to show him, that’s up to the fans. Personally I disagree with this. I think there is nothing wrong with a little five minute video tribute before the game, honoring one of the greatest players in franchise history. I think it’s a classy move by the Mets and it shows they are thankful for all that he’s done.

The way I look at Reyes is that he is only the enemy from first pitch to last out. In between those times Reyes is an opposing player who we wanted to strike out every time, and throw him out every time he attempts a stolen base. But when he’s not on the field sporting that gaudy uniform, he is one of my favorite all-time players.

If the Mets are choosing to honor Larry Jones this year, why wouldn’t they honor Reyes? Although I think they should do a bit more for Larry considering he’s retiring after the season, it’s still the same concept; honoring an opposing player on a rival team for his contributions to the teams franchise. Because whether you like it or not Larry has done a lot for the Mets/Braves rivalry, which was one of the best in sports at one point. If I’m in the stands I would give Larry a standing ovation in his first at-bat at Citi Field this year, and give him an even bigger one for his last one.

Now some people would ask, “when will the Mets honor Jimmy Rollins?” In his case, it’s a little different. He’s a guy that has gone out in public and insulted the Mets and called out their team. Larry is a guy who has never said anything wrong or done anything wrong on the field. The only reason Mets fans hate Larry is because he destroys the Mets. Also, Larry is one of the greatest hitters of all-time, while Rollins simple isn’t. Who knows what will happen when Rollins decides to retire. Though he did make the rivalry more fun, there is a lot more hate and a lot less respect for him compare to Larry.

I was at the game where Mike Piazza made his return to Shea Stadium wearing a San Diego Padres uniform, and the Mets did a similar thing. Even after he hit a home run, fans gave him a standing ovation and he gave a curtain call. After his second one, things were slightly different, but you get the point. Of course Piazza’s situation wasn’t the same as Reyes’ because he was at the end of his career and his level of production had dropped.

Piazza and Reyes are on the same level in my opinion. While Piazza is held a bit higher and is a lock for the Hall of Fame and to have his jersey retired, both he and Reyes dominate the Mets all-time statistic board. And after Reyes retires the Mets will have to think real hard about retiring number seven.

I’m going to try very hard to get down to Citi for the game on Tuesday so I can show my support for Jose. He is still one of my favorite players, and I still have all the respect in the world for him. It’s going to be painful to see him not coming out of the first base dugout, but the Mets are a different team now. Letting go of Reyes showed that the Mets are ready to move in a new direction and start a new chapter of their franchises history. Though Reyes was an all-time great, they never won a title with him and in the end his price tag was more than what the Mets could afford to give him. That being said, I think it would be wrong of the Mets not to honor one of the great players in their team’s history on his first game back to his old ballpark. And they should do it again on his last game there, for whichever team that may be for.