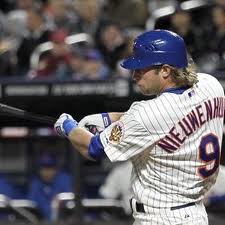 Terry Collins moved Captain Kirk to the leadoff spot on Wednesday against the Braves.  Kirk went 3 for 4 with 3 runs scored, an RBI and a stolen base.  Those dividends and Kirk’s blistering .375 batting average are not things that we can expect day in and day out from him, but lacking a natural leadoff hitter, he might be the best option the Mets have on the roster.  I would venture that, at least, when the starter is a righty Kirk Nieuwenhuis is the best option the Mets have for the top of their order.

Andres Torres – He is certainly the fastest option the Mets have readily at their disposal.  He’s a switch hitter and he has a little power and he’ll score runs but there is a fatal flaw in Torres’ game that keeps him from slotting in as a natural leadoff candidate, On Base Percentage.  His Career OBP in the majors is .318 and though that isn’t helped by a career .243 BA neither is the argument for him leading off.  A leadoff hitter needs to be on base as closed to 40% of the time as possible… or better.  Andres is never going to be that guy.  In fact, his power and switch hitting lend himself slightly better to the later order than others.

Ruben Tejada – The young shortstop is winning me over game by game and I’ll concede that he can be a leadoff hitter or a number two hitter in the Met lineup.  However, he’s not there yet.  The other issue is that Tejada really isn’t fast.  He can run and steal the occasional base but it’s not like I’d bank on him reaching double digits in the majors.  You want the player leading off to be able to move himself along the bases on occasion and I’m not sure that is really in Ruben’s arsenal.

Kirk Nieuwenhuis – 2011 was the breakout year for Kirk Nieuwenhuis’ OBP.  He jumped from sitting around .350 to a .400 OBP and while that jump was sudden it was helped in most ways by a healthy jump in BA.  On average his OBP has rested approximately 70 points higher than his BA and that isn’t too shabby.  In terms of speed and power I really think where he hits will factor in.  Leading off, I could see Nieuwenhuis stealing 20 bases, especially with Murphy, Tejada or Wright hitting after him.  Hitting later in the order the speed takes a hit and the power gets a boost but the important thing with Kirk is that he has good At Bats and works the count.

You can talk about Jordany Valdespin a little but unless Tejada is hurt, he’s not really an option and he needs to continue (He’s on his way) to improve his plate discipline before I’d want him leading off.  With this in mind I think that Terry Collins would be wise to leave Captain Kirk at the front of the Met lineup… even when Torres comes back.