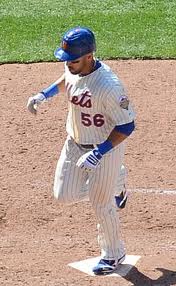 Well the Mets certainly had an interesting series in Denver this weekend. They got smoked in the first game losing 18-9, they were down twice in the second game but won 7-5, and today after blowing a 4-0 lead for Johan Santana, they won in extra innings 6-5 in spite of the bullpen’s worst efforts. As a typical series at Coors Field, the offense enjoyed the visit, and the pitching did not (except for Johan).

Now the Mets will had to Houston to take on one of the worst teams in baseball. If you’re the Mets the goal has to be to sweep, but they need to win at least two out of three. And as interesting as the series in Denver was, the series in Houston will be interesting for a different reason.

After the game today the Mets optioned Zach Lutz back down to the minors in order to make room for Andres Torres. He’s been on the DL since April 6th with a strained right calf, an injury he dealt with during Spring Training, and re-injured on Opening Day.

When Torres went down it was definitely a blow for the Mets, but Kirk Niewenhuis made the situation much better. He came in and immediately had a positive impacted on the club. Now Torres, who was suppose to be the center fielder and lead-off hitter for this team, comes back to see a guy who is thieving in the role he left.

The Mets need to decided three things now between Torres and Kirk: 1) who will play center field 2) who will hit lead-off and 3) where will the other player hit in the line-up. The whole situation is made easier by the fact that Jason Bay is not in the picture. If he was, then Terry Collins would have a much bigger bag of problems. He will have to deal with it eventually, but for now he can put it off.

So let’s address the questions now. My vote is for Kirk in center. Now I don’t think he is a better fielder then Torres, they are both very, very, good. The reason I go with Kirk is that Torres is coming off the injury, and in left field he wouldn’t have to cover as much ground, thus easing him back into action. Torres should reclaim his position as the team’s lead-off hitter though. Now there is the question of where to bat Kirk. There is really no easy answer. The line-up will probably look something like this for tomorrow:

The problem is that there are four lefties at the end of the line-up. Also, Kirk has to adjust from being a run manufacture to a run producer in that number seven hole.

The thing I don’t understand is hearing people not wanting Torres to come back into the line-up and that he is a fourth outfielder. First off, he hasn’t even really played this year so you have to give him a shot. Second, these people clearly didn’t watch Spring Training, and forgot all the great things he was doing down in the Florida. I know if doesn’t count, but you have to give him some credit. I even read somewhere that they should play Mike Baxter in favor of Torres.

It’s weird to see all his negativity towards Torres’ return when he will bring three things to the table that the Mets have been lacking; speed,  a right-hand bat, and defense. Anyway you look at it Torres returning to the Mets line-up is a good thing. The real question will be what to do when Bay comes back. I’m sure at this point most Mets fans would rather have Baxter than Bay.