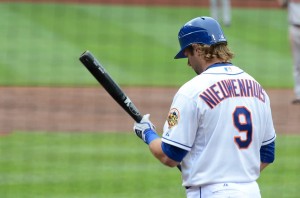 Coming into the 2012 season, I had Kirk Nieuwenhuis rated as the #5 prospect in the farm system, ahead of both Wilmer Flores and Cesar Puello. I have been a Nieuwenhuis backer long before that, too, having ranked him in 2011 (#5 prospect) and 2010 (#9 prospect). I was excited when he got the call to the majors and thrilled when he did well right off the bat.

But the simple fact is that he has been at best average since mid May. Over his last 38 games, covering 127 PA, Nieuwenhuis has a .252/.291/.412 line. That’s a touch below average production but it comes with a .325 BABIP. Perhaps even more importantly, it comes with Nieuwenhuis enjoying the platoon advantage in the great majority of his trips to the plate.

The lefty has an .821 OPS versus RHP and a .550 OPS versus southpaws. It’s not surprising that he has struggled mightily against lefties. What does come as a shock is how poorly he has done recently since Terry Collins moved to shield him from LHP. In his last eight games, Nieuwenhuis has 23 PA. Without actually going through and counting, my guess is that at least 20 (and perhaps all) of those came against RHP.

Nieuwenhuis did not start against lefties Brian Matusz, Andy Pettitte, C.C. Sabathia and Travis Wood. And when the Orioles brought in lefty Dana Eveland as a reliever, Collins pinch-hit for his young center fielder.

So, without having the torture of facing LHP, Nieuwenhuis has a .130/.130/.261 mark. It’s a slump and every hitter has them throughout a long season. But what makes this slump stand out even more is that in 23 PA, Nieuwenhuis has struck out 13 times. That’s a 57 percent strikeout rate.

That type of whiff percentage would be understandable if Nieuwenhuis went through a stretch where he faced Cole Hamels, Cliff Lee and Gio Gonzalez. But not only did he not face those lefties with a high strikeout rate – he essentially did not face any lefties at all.

Up to a point, strikeouts are no worse than any other out and for power hitters they can be the cost of doing business. But once a batter’s K% reaches 25 percent, red flags should be going off that they are an issue.

Of the 25 players with a 25 percent or greater K rate, Dan Uggla has the highest fWAR with a 2.4 mark. WAR is a type of counting stat, so 2.4 before the All-Star break is a pretty good total. However, 30 batters have exceeded that mark so far in 2012. David Wright is second in MLB with a 4.4 fWAR.

Wright has really cut down on his strikeouts from a season ago. Last year, Wright had a 1.9 fWAR in 447 PA, as he had a 21.7 K%. This year, in 144 fewer PA, Wright’s fWAR is 2.5 wins higher, due in no small part to his K% dropping to 12.9 percent. Now, Wright has improved greatly in his fielding, too, so we cannot attribute all of his success to his drop in strikeouts. But Wright was an MVP candidate the years his K% was in the mid teens. The past three years when his strikeout rate was over 20 percent each year, he was not one of the elite players in the game.

Nieuwenhuis has the fifth-worst strikeout rate in the majors, with a 29.3 K%. He’s been remarkably productive given his K rate, as only four players with a strikeout rate of 25% or greater have a higher fWAR than Nieuwenhuis’ 1.4 here in 2012. But the Mets’ rookie has posted that mark with a .382 BABIP, which is an unsustainable rate.

When the hits stop falling in at such a high rate, the crash is going to be ugly. What we’ve seen in the last eight games is already not pretty. You can live with a 10-day slump like what Nieuwenhuis is going through now. What I fear is that instead of breaking out of it in the immediate future that instead we may be in store for a slump of Ike Davis-like proportions.

The Mets called up Nieuwenhuis earlier than they wanted this year when Andres Torres hit the DL. Torres is back now but has not hit enough to unseat Nieuwenhuis and reclaim his starter’s job. But he might inherit the starter’s job by default if Nieuwenhuis continues to strike out in more than half of his at-bats.

One comment on “Kirk Nieuwenhuis and the strikeout issue”