The signings of Chris Young, Curtis Granderson, and Bartolo Colon provide a clearer view into what will ultimately be the Mets 2014 squad. Barring an unlikely trade for a high-profile shortstop or outfielder, these are likely to be the biggest additions to the roster before next season. The outfield has markedly improved from what it was going into the 2013 season, though it remains to be seen whether it can replace Marlon Byrd‘s surprise 2013 performance. Shortstop and first base are still big question marks, though, and the bullpen still needs some additions.

That being said, the success of the 2014 Mets will depend heavily on the contributions of rookies, second-year players, and various other youngsters. Of course the same could be said about the 2013 team, but realistically expectations are much higher for next season.

The rotation looks to be a strength for the team even without Matt Harvey. Still, that success will be largely measured by whether or not Zack Wheeler can continue to make strides in his second season. Wheeler had a very solid rookie season in 2013 and went 7-5 with a 3.42 ERA, 4.1 BB/9, 7.6 K/9, and 1.360 WHIP. Fans should not expect to see Wheeler put up a second year like Harvey did, but the future is bright for the young hurler.

Catcher Travis d’Arnaud, who will maintain rookie status in 2014, did not have quite as successful a debut as Wheeler. D’Arnaud had a triple slash of .202/.286/.263 and an OPS+ of 58 in 32 games last season. This is an incredibly small sample size, but the reason for concern is not the poor numbers. The fact that the sample size ended up being so small in the first place is the most concerning aspect of his debut. There is little doubt that the young catcher has the ability to catch and hit at the major league level, but his injury history has many doubting whether he can actually stay on the field to do it. He’ll be the fulltime catcher in his first full season in 2014, and Mets fans can optimistically dream of a rookie of the year candidate if he can stay healthy.

Center fielder Juan Lagares went from interesting outfield prospect to one of the best defensive center fielders in baseball in 2013. It was quite a nice surprise for a Mets fan base that had to endure the likes of Collin Cowgill, Rick Ankiel, and Jordany Valdespin at the position through various points of last season. Lagares has the defensive chops to be a perennial gold glove candidate in the center field, but doubts remain as to whether he can hit well enough to justify a starting role. 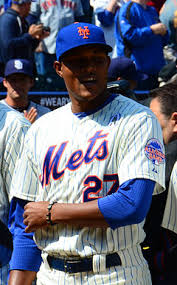 The team is still looking to add some late-inning experience to a bullpen that wasn’t quite as bad last season as in years past. However, it’s looking likely that the team will be relying heavily on young pitchers like Vic Black, Josh Edgin, Jeurys Familia, and others in 2014. It’s essentially shaping up to be a power bullpen, which can be truly dominating if they can live up to their potential. Closer Bobby Parnell‘s status appears to be in the air at this point so the more bullpen depth the team can acquire the better.

Ruben Tejada, still a young player himself, is likely to be the opening day shortstop again next season. He took several steps back last season and seemingly lost his starting role, but the team doesn’t have many options beyond him. He has a history of being a solidly productive player so all hopes are that he can return to being the player he’s shown he can be.

Depending on how the rest of the 2014 roster shakes out, the team may have young and inexperienced players like Wilmer Flores, Josh Satin, and Wilfredo Tovar looking to get playing time off of the bench as well. Add to that the likely promotions of prospects like Noah Syndergaard, Rafael Montero, Jacob deGrom, and Jeff Walters at various points throughout next season, and the team will truly sink or swim with their young and inexperienced players in 2014.

11 comments on “Mets depending heavily on inexperienced players in 2014”