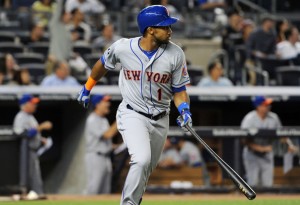 Chris Young‘s overall numbers don’t paint a rosy picture. His dropped flyball in the bottom of the 14th inning in Friday night’s 6-5 loss to the Phillies will not endear him to Mets’ faithful either.

Life for Young has not been so great in his first year with the Mets.

A meager .205/.290/.368 slash line has many Mets’ fans down on Young. With Curtis Granderson already a drain when it comes to having a player on the team with weak contact skills in the lineup, the Mets unfortunately have another one in the lineup in Young. You add them together with Ruben Tejada and Travis d’Arnaud, the Mets basically four regulars who are hovering around the Mendoza line.

If you got that many many weak hitters, you’re going to have to make up for it in power. From their pasts, we know that both Granderson and Young are both capable of hitting 20+ home runs a year.

Young, who went deep of Phillies’ starter David Buchanan on Thursday night, has to hit for power if he wants to stay in the lineup and contribute. We all knew this about Young, who came to the Mets in the offseason for a one-year, $7.25 million-dollar deal. Looking back on it now, and with the power of hindsight, maybe the Mets moved too quickly to scoop up Young. You see, a player who was signed for a similar amount ($8 million for one year), Nelson Cruz, has been absolutely killing it, while leading the league in home runs and in second in RBI’s (49). At the time the Mets signed Young, Cruz though was holding out for a lot more money and years and there was no telling where the market was heading in November. Safe to say, the Orioles got themselves a bargain.

There is no use in crying over spilled milk, though. You have to move on and hope that Young can hit for some semblance of power, or else his job-regardless of the contract he was signed to-will be in jeopardy.

Young is probably lucky that his other namesake, Eric Young Jr. is on the disabled list. If Young Jr. was around, Chris Young would be skating on thin ice for extended playing time. It seems that Juan Lagares is back to regular playing time and Granderson, short of an epic disaster, will continue to be trotted out every day.

As it is, Young is losing time to Bobby Abreu, who go the start in right on Friday night in Philadelphia, while Granderson shifted to left field.

Simply put, Young has to get his power stroke going. He has hit as many as 32 in one year (2007) and has averaged 20.2 home runs a year ever since that breakout year. Power and perhaps a good bit of speed is Young’s saving grace. It’s time we see it put to good use.

So, if the Mets want to get any investment on Young, it behooves him to get his power stroke going or this may go down as another wasted signing, even if it was only for a year.