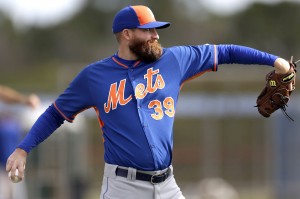 That title above is kind of a strange question. The immediate answer is, “Of course it is.” When any pitcher you’ve invested a good chunk of time watching – as a field manager, an executive or a fan – is recovering from Tommy John surgery, you can’t help but worry. Despite the evidence from players like Matt Harvey, Adam Wainwright and, heck, Tommy John himself, there are no guarantees that coming through with flying colors on the operating table will translate to success on the mound. As fans, we can get lulled into a sense that post-surgery, the pitcher will come back better than ever. Sometimes, it doesn’t quite work out.

Bobby Parnell arrived on the scene as wielder of pure flame. The radar guns routinely lit up north of 97 MPH, even touching on 101 or 102 on occasion. The problem was that there was precious little movement on the Parnell blazer. As the old adage goes, it doesn’t matter how fast you throw it: if it stays straight, major league hitters will catch up to it. From 2008 to 2010, that’s exactly what happened, especially during a misbegotten experiment with Parnell as a starter for eight games in late-2009. It looked for all the world like he would never “find it,” the missing ingredient that would turn his velocity lethal. Until an old face returned, that is.

In spring training 2011, the Mets signed their former closer Jason Isringhausen to bolster a shaky bullpen, led by volatile current closer Francisco Rodriguez. Isringhausen was a practitioner of the knuckle-curve, and had carved out a fine career with its help. During long hours in Florida and in major league bullpens across the land, Parnell soaked up the veteran’s wisdom and began fooling hitters in a middle-innings/setup role. When Rodriguez was traded to Milwaukee in July and Isringhausen started showing his age, Parnell found himself the team’s closer. Though supplanted by the egregious Frank Francisco in 2012, over the next two-plus seasons, he did not disappoint. Parnell saved 35 games between August 2011 and September 2013. The job was finally his and Mets folks were pleased with that.

On Opening Day 2014, though, Parnell pitched a shaky ninth inning, surrendering the tying run in a brutal extra-inning loss. It was his only appearance of the year, as it was shortly determined that surgery would be necessary. He has just now begun a very rocky road to recovery. Finally back out on the mound in rehab assignments, he’s been being roughed up by minor league hitters in St. Lucie and Binghamton. In 11 high-A/AA innings, he has surrendered 21 hits and 13 walks, resulting in a rehab WHIP of 3.091. He has only struck out eight youngsters, so his K/BB ratio is an appalling 0.62. Sprinkle those ghastly numbers with the fact that he’s had his rehab shut down more than once since spring training and his future becomes troubling.

It was thought that Bobby Parnell would come back sometime in the early-season and bolster the ‘pen. Not that he would step right back into the closer’s role right away – Jeurys Familia’s electrifying start to the year has rendered that question almost moot – but he would be a valuable, live arm late in games, especially with Vic Black and Jerry Blevins also remaining on the shelf.

7 comments on “Is It Time To Worry About Bobby Parnell?”