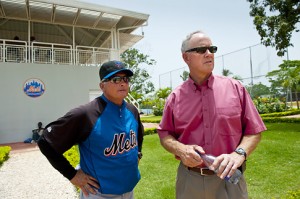 The Mets are in contention for a playoff spot this year, and are searching for ways to improve the current roster. On Friday, it was announced that Daniel Murphy would be going on the 15-day disabled list with strained quadriceps, an injury that will hurt this ball club quite a bit. Also, Terry Collins announced that the team will be returning to a five-man rotation, as Dillon Gee will become a spot starter and long reliever out of the bullpen. The Mets need to put the best team on the field, and they need to make a run for the postseason this year, as the National League East is going to be a race between the Mets and the Washington Nationals. Here are some changes Sandy Alderson and Terry Collins may want to consider going forward:

Move Wilmer Flores to second, and Ruben Tejada to shortstop

It makes sense to keep Flores at shortstop and move Tejada to second in order to make Flores more comfortable at shortstop. Are the Mets truly sold on Flores being their everyday shortstop for the next decade? Although he is only 23 years old, Flores has not gotten things going offensively, as his average has been hovering around .250, and his OBP has been below .300. The move to second base may give him more confidence in the field, and maybe the switch will spark his offensive game. The infield defense would improve, as Tejada has shown he can be a good defensive shortstop. If Flores can drive in runs and get on base at a higher clip, Flores could be a valuable player moving forward for the Mets.

Prepare for David Wright to miss the entire season

It is a shame that the Mets are finally competing, yet their captain is on the disabled list. Wright’s spinal stenosis is a troubling injury, and there is no timetable on his return. Obviously fans and the Mets want Wright back as soon as possible, but the organization should consider players outside the organization to play third base until Wright comes back. Eric Campbell and Danny Muno are solid players, however they have not provided enough offense when given playing time. The Mets can get by if Campbell hits like he did last year, but the team may want to acquire a player if they can upgrade.

Call up Steven Matz, and put him in the starting rotation

Having a surplus of pitching is tremendous. Alderson’s inability to move a starting pitcher may be hurting the team, as Matz continues to carve up hitters in Triple-A Las Vegas. Fans have seen Jon Niese struggle recently, as his ERA has gone from 1.95 to 4.43 over his last five starts. His last start against Arizona was a quality start, and it was promising to see him strike out eight hitters in six innings. Niese could be an attractive starting pitcher for other teams searching for pitching, and the Mets may be able to get a good player in return. Dillon Gee was supposed to be a starting pitcher, but Collins has decided to put him back into the bullpen after his start in San Diego, when he allowed seven runs in four innings. Alderson must trade one of his veteran starters in order for the Mets to call up Matz.

It seems probable that the Mets will be making a trade soon, as they look to upgrade the offense, the infield’s defense, and open up a spot for Steven Matz in the rotation. If players on the disabled list, such as Travis d’Arnaud and Dilson Herrera come back and produce at a high level, the offense should pick up, and produce more runs. The team has the starting pitching to compete for a playoff spot, but the offense and defense must improve if the Mets want to make a serious run for the playoffs.