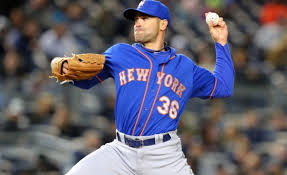 Let’s turn the clock back to the beginning of the 2015 season and let me propose a situation to you. Your bullpen is rested after a day off and everyone is available. You’re on the road and you have a lead heading to the bottom of the seventh and you need to go to your bullpen. Do you put in a Rule 5 pick with a 2.17 ERA and 1.095 WHIP or the guy with 104 lifetime Saves and a 1.47 ERA and a 1.036 WHIP since returning from the minors?

They both seem like solid choices. Terry Collins opted for Sean Gilmartin Friday night and it didn’t work out. Hey, it happens. It just seems odd that the team acquired Addison Reed to be its seventh-inning man, had an opportunity to use him to start the seventh inning and chose to go in a different direction.

On the surface, it was a defensible choice that didn’t work out. The disgusting thing is that the choice was made based on matchups with no regard to the pitchers involved. Three of the first four batters in the seventh for the Marlins were lefty, so Collins brought in the lefthander. Never mind that lefties have an OPS 70 points higher against Gilmartin than righties. He’s a lefty and he has to be used against LHB.

Now’s a good time to point out that LHB have a .663 OPS against Reed while RHB have an .817 mark against him this year. But it doesn’t matter. Because our manager’s gospel says that anytime you can go righty-righty at the end of the game, you have to do it. Reed allowed an RBI single to the righty to tie the game. He then retired the next batter, a lefty.

Collins managed for the platoon advantage and when his relievers had it in the seventh inning, Marlins batters were 3-for-4 with a walk.

In the aggregate, lefty pitchers fare better against lefty batters and righty pitchers fare better against righty batters. But every single lefty and every single righty does not perform this way. In Gilmartin and Reed, the Mets have two guys who are the exception. And if our manager insists on ignoring this, we’re going to see more results like Friday.

The Mets have a nice back of the bullpen in place now. Reed, Tyler Clippard and Jeurys Familia should always be the choice for innings seven-eight-nine when the team has a lead. And the really nice thing is that there’s no need to alter this pattern because of who’s at the plate. These three righty relievers all fare well against lefties! Here are their numbers versus LHB this year:

This trio limits lefties to a .171 average this year. The average RH in the National League allows a .265/.337/.428 line versus lefties. While Reed may be the weak link of this trio, he still has an OPS against lefties 102 points lower than the average righty. That’s quite good.

The takeaway (or lesson) from Friday’s loss should be to use Reed as the seventh inning guy unless there’s a compelling reason to do otherwise. Pitching with no rest would be a compelling reason. Having a bunch of lefties due up is not one.

And if there’s another takeaway, it should be to cut the useless LOOGY right now. But as the Mets continue to trot him out there, despite a 7.85 ERA and a 2.093 WHIP overall and a 13.50 ERA and a 2.455 WHIP with the Mets – let’s hope the team learns the first lesson a little quicker.

12 comments on “Sean Gilmartin, Addison Reed and managing for the platoon advantage”