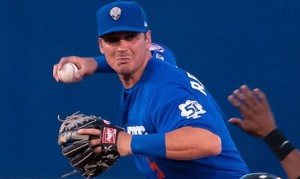 Jeff Sullivan had a great column over at FanGraphs the other day, asking readers to identify what type of baseball dork they are. Jeff outed himself as a pitching dork, saying that’s the area of the game he enjoyed most, likely because he used to be a pitcher. While he focused on sections of the game – pitching, hitting, defense – I found myself wondering about particular players.

Sure, it’s easy to see why some people are Matt Harvey fans. And it’s also easy to see what’s so appealing about Yoenis Cespedes. These guys have outstanding talent and also carry themselves with a fair amount of swagger. Who wouldn’t want to date supermodels or show up to work each day with a different ride?

Or maybe you prefer someone who excels but is a little more understated. David Wright is the poster boy for this type. Perhaps it’s just because of their more celebrated teammates but both Jacob deGrom and Steven Matz seem to fit this particular bill.

Perhaps you like the young guys. Michael Conforto is a first-round pick and the next year he’s playing a key role on a team that goes to the World Series. Or maybe it’s the exact opposite and you want to cheer for an older guy, thinking you can maintain your hopes and dreams of an MLB career as long as there’s someone born before you playing in the majors. Bartolo Colon, because of his age and weight, would probably never be confused for a professional baseball player if an average person saw him walking down the street. But there he is flipping the ball behind his back and getting eight hits last year.

Growing up, my favorite player was Duffy Dyer. He didn’t really excel and he didn’t have anything that would make you go, Wow! Maybe it was the name. Kids latch on to weird things.

What gets me is how many adults have latched on to Matt Reynolds. They are somewhat excited about the injury to Asdrubal Cabrera and the possibility now of Reynolds being on the Opening Day roster. There’s nothing wrong about being happy about seeing a guy you back getting an opportunity – that makes perfect sense. What’s head-scratching for me is how these people latched on to Reynolds in the first place.

So, what the heck happened in 2014 and why is it unrepeatable?

Reynolds posted a .433 BABIP in Double-A and followed that up with a .404 BABIP in Triple-A in 2014. Now, minor league BABIPs do not necessarily follow the same rules as ones recorded in the majors. But a mark over .400 is still extremely high. Last year in the PCL, only three batters who qualified for the batting title had a .400 BABIP. By contrast, Odubel Herrera had a .387 BABIP for the highest mark among MLB qualified hitters.

Does anyone expect Herrera to come within 50 points of that mark this year?

Last year in Las Vegas, Reynolds posted a .319 BABIP. FanGraphs does not have convenient team-wide numbers for minor league teams. But among those on the 51s with at least 100 PA, Reynolds’ .319 mark ranked 10th out of 19 players – exactly in the middle. And with this median BABIP, Reynolds posted an OPS 68 points below the team mark. And that team mark includes pitchers.

The bottom line is this – Reynolds had a solid debut the year he was drafted. And then he was not good at all in either 2013 or 2015. He was good in one year when he had a super-inflated BABIP. But he’s never been remotely close to those numbers either before or since. Here are his year-by-year BABIPs:

The hits fell in for Reynolds in 2014. We’ve all seen guys who had poor luck, so It’s always nice to see a guy enjoy some good fortune. But it’s important to differentiate between what’s fortune and what’s skill. It’s not like Reynolds is without skills. He’s not completely allergic to taking a walk and he’s got acceptable power for a shortstop. If he breaks camp with the club, he likely won’t be the worst player in the majors.

My preference is to see guys from the farm system get a chance. If Reynolds goes north with the club, that will be a good thing because they rewarded a guy who came up through the ranks. A symbolic victory, if you will. But my preference would be for Campbell, another farm product, to get the spot because he’s a better overall fit, with experience playing both infield corners, as well as the outfield.

22 comments on “Why are fans enamored with Matt Reynolds?”