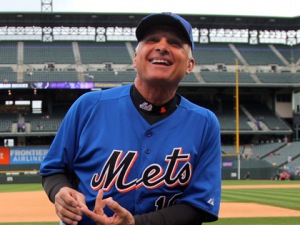 It may have been the NBA that brought the concept of “Keep Gettin’ Dem Checks” to our consciousness but Terry Collins has turned it into an MLB art form. Truly, did anyone think that the guy hired to be a placeholder at age 61 back in late 2010 would still be managing the club in 2017? It’s almost mind boggling in a way. Adore him or despise him, no one can deny that Collins has done a masterful job of cashing checks.

He’s now third all-time in games managed for the Mets and assuming he manages all 162 games this upcoming year, he’ll be number one on the list. Winning percentage is a slightly different story, as his .490 mark ranks seventh among team skippers, a few percentage points behind Yogi Berra, who was only allowed to pilot the team for 588 games, 384 fewer than Collins to date.

Their circumstances were different, as Berra took over a team that was primed to compete while Collins assumed control of a team that needed to be overhauled. But Collins’ situation is much more common. Therefore the question is: How then was he allowed to stick around for so many games? His Met tenure alone would place Collins among the top 150 managers in MLB history in games at the helm. Overall, he’s managed 1,850 games in the majors.

Assuming he finishes out the 2017 season, Collins will move past Red Schoendienst and have the 60-most games managed in MLB history. That’s Hall of Famer Schoendienst. If Collins somehow stays around and completes the 2018 season, he will crack the top 50 in games managed. Right now, 31 of the top 50 managers in games are in the Hall of Fame and it’s possible that a few more – Terry Francona? Bruce Bochy? Dusty Baker? – will add to the total.

Even the non-HOF managers in the top 50 are heavyweights. Guys like Gene Mauch and Davey Johnson and Ralph Houk. If this was an SAT question, it would be a layup. Which one doesn’t belong in this group?

Yet here we are.

Recently, Matt Cerrone at MetsBlog was wondering about Collins’ legacy. He took the easy (and correct) way out by saying it was too soon to tell, as the story was still being written. But it seems necessary for those of us who are living in the moment to articulate their opinions, so that we don’t wind up with only revisionist history recorded.

As a manager, Collins was a compiler, a guy who put up the numbers he did only because he was allowed to keep the job as long as he did. He played nice in Sandy Alderson’s sandbox and was allowed to stick around when others would have been kicked to the curb. Bobby Valentine let his opinions be known to management and was shown the door. Collins for the most part keeps his mouth shut and does what he’s told.

Without a doubt, Collins brought respectability back to the manager’s office for the Mets. For the most part, he handles the media without major blowups, which is not a small feat in New York. His players seem to like him.

The first one is why he should have been allowed to manage the second year of his initial two-year contract. It really shouldn’t carry any weight past that. The last one says at least as much about the players as it does the manager. Can you imagine David Wright, Curtis Granderson and Asdrubal Cabrera bad mouthing a manager? Those guys could probably find something nice to say about Vern Rapp.

So that leaves getting along with the media. It’s a point in Collins’ favor, without a doubt. But while not everyone can do it, we saw Bryan Price struggle with the brutal Cincinnati media last year, let’s not pretend that only a few people on earth could do it. If Collins got along with the media but didn’t carry water for Alderson, do you think he would still be here? So, let’s recognize that this strength for Collins is not what ultimately is keeping him employed.

My opinion is that Collins would make a great neighbor. He wouldn’t throw any loud parties, he’d never block your driveway and he’d always keep his lawn looking nice. You’d give him a friendly wave when you saw him outside, talk nicely about him to others and always remember to give him a fruitcake for Christmas. But you’d never willingly spend time with him discussing important things nor invite him to hang out when your real friends came by.

The qualities that make him a good neighbor, or friendly to the media, don’t necessarily translate into being a good manager when the game is being played. A lot of people preach that this aspect of the job is overrated. And perhaps it is. But when we’re assessing a manager’s legacy, it’s hard to ignore when a guy’s decisions in the actual dugout are so … bad. That absolutely must be stated when discussing his strengths and weaknesses and assessing his place in history.

How about this for Collins’ legacy?

After losing control of the clubhouse in his previous managerial stops in Houston and Anaheim, Collins did much better in this regard in New York, in no small part because of the good-guy nature of his star players. Because of his demeanor in press conferences day after day, Collins mostly got a free pass from the media, who never questioned either his core managerial philosophy or his day-to-day moves. Most other guys who ran their star players into the ground, overworked their bullpen and missed obvious substitution moves would be crucified in the tabloids. But not Collins.

He willingly played the role of spineless middle manager, never sparking any creative friction with his GM. All of these things allowed him to stay employed, while guys who were hired around the same time – Mike Quade, Edwin Rodriguez, Ron Roenicke – suffered the usual managerial fate. And when the young pitchers arrived in Queens and Alderson traded for Yoenis Cespedes, the team’s talent more than made up for his managerial blunders.

Jalen Rose spoke about his “Keep Gettin’ Dem Checks” ESPN segment and said about the show’s focus, “it’s a great way to acknowledge those whose contracts are outperforming them, not the other way around.” With his latest contract, Collins’ pay scale cracked into seven-digits per year. So you can look at it that he’s making less than the backup catcher. But he’s probably doing less to push the team forward, too.