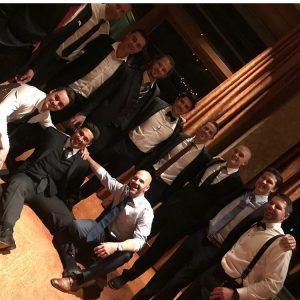 Chemistry, intangibles, things that don’t show up in the box score. We’ve heard these and other phrases a million times throughout the years. Some people dismiss these out of hand while others assign mythic qualities to them. My beliefs align much closer to the former. However, anyone who’s been in any kind of work environment knows that there are people who make things better and people who make things worse.

Unfortunately, it’s not always easy to tell those things from afar. In a sports environment, we depend on announcers and other media people to fill in the blanks for us. Which makes sense, since they’re in the locker rooms and maybe even on the planes with the athletes. They get to see them interact beyond how well they turn the double play together.

The problem is that the media is there but there’s still a barrier between them and the players. Maybe it’s nothing more than an age difference. Perhaps it’s the jock versus nerd thing that never truly goes away. Or maybe it’s the players doing whatever they can to maintain privacy in their fishbowl existence. Whatever the reason, the media doesn’t always get things right.

How often were we told what a great influence Bartolo Colon was for the younger Mets pitchers? And then when he was released by the Braves and free to sign with whichever team he wanted, Colon picked the Twins when supposedly the Mets’ brass wanted him back. Colon told Thomas Lipe of the New York Post,

I [was] surprised,” Colon said through an interpreter. “I have a lot of friends with the Mets, and none of the players called me to see if I could come back with the Mets.

What happened here? Just trying to put myself in the shoes of the Mets players. If someone who helped me and who was a great guy was available, wouldn’t I touch base with him and try to get him back? It just seems like someone would. Maybe there were six guys who really wanted him back and each one thought someone else had a stronger relationship with Colon and would be the one to reach out to him. It’s impossible to know why this happened. All we know is that no one reached out to this alleged beloved teammate.

Then there was Asdrubal Cabrera, frequently seen on the top step of the dugout to remove the batting helmet of a teammate who just scored. We were told repeatedly what a team guy he was and then he demanded his option to be picked up before he would move to third base. A momentary lapse in judgment? Sure, that’s a strong possibility. Although he didn’t seem to be on the top step very much the second half of last year and rookie Amed Rosario sure seemed to click better with Jose Reyes than he did with Cabrera.

And of course the biggest example doesn’t come with a player but with ex-manager Terry Collins. For years we were told what a great guy he was and how his players loved him and never quit on him. And then there was Marc Carig’s piece which shattered a lot of those myths to pieces. Personally, I would have preferred that story to have been written years earlier than it was. The timing made it look like a hit piece. Maybe it was. But if nothing else it showed that not everything was rosy by the end of the 2017 season.

Perhaps the takeaway is that with a large group that things are never harmonious 100 percent of the time, even among those considered leaders and great teammates. Not even chemistry bats 1.000 in the clutch.

Regardless, let’s move on to positive sides of this chemistry issue.

After living in each other’s pockets since Spring Training, it’s not a surprise when the season ends and guys go their separate ways. Yet we’ve heard quite a bit about Mets teammates interacting with each other here in the offseason. Here are a few items, mostly pulled from MetsBlog pieces .

Brandon Nimmo plans to attend Steven Matz’ wedding later in the offseason.
Nimmo and Kevin Plawecki met unexpectedly in Maui and went snorkeling together.
Jerry Blevins has spoken to Matt Harvey a few times.
A bunch of teammates, including Harvey and Plawecki, showed up for Travis d’Arnaud’s wedding.

The picture at the top of this article was from d’Arnaud’s wedding. A bunch of Mets guys in here but perhaps the most interesting guy is not a current Met but a former one. On the top row, nestled between David Wright and Jacob deGrom is a bald guy. And in case you don’t recognize him without his uniform on, that’s Addison Reed.

My hope is that Reed developed great chemistry with his former Mets teammates and would be open to coming back here as a free agent. It seems most of the buzz among relievers is for Bryan Shaw and the most buzz among a reunion of guys traded last year is for Jay Bruce. Both of those guys would be okay. But given my druthers, my choice would be for Reed.

For, you know, chemistry reasons.