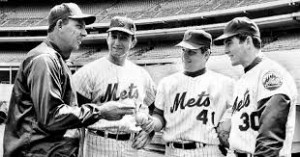 The upcoming baseball season will mark the 50th anniversary of the ‘68 Mets. This squad was interesting in several ways, as it gave indications of what was to come in the historic WS winning 1969 season.

The club posted a record of 73-89, good enough for ninth place in the NL, 24 games behind the pennant-winning St. Louis Cardinals. That doesn’t sound all that impressive, but it was by Mets standards of the day. This was the best record the team had ever posted up to that point. For a while, the team was even in the pennant race, another first. At the end of May the Mets had a 23-21 record, putting them in fourth place in the 10-team NL, seven-and-a-half games out of first.

1968 was the year of the pitcher, and pitching was the strength of the team. They finished fourth in team ERA with a 2.72 mark, not far behind the leader, the Cardinals with their 2.49 ERA. The Cardinals had Bob Gibson with his microscopic mark of 1.12. The Mets featured Tom Seaver, who had won the Rookie of the Year award in 1967, and newcomer Jerry Koosman, who finished second (to Johnny Bench) in the 1968 Rookie of the Year voting.

The team’s offense did not keep up with the pitching, scoring only 473 runs to finish ninth. The biggest jolt of hitting came from 25 year old Cleon Jones. He put up a slash line of .297/.341/.452 with 29 doubles and 23 SB in that hitting-challenged season. Other notable contributors with the bat included Ed Charles and Jerry Grote. New comer Tommie Agee was a disappointment with a .217 BA and a SLG of .307. He would do a lot better in the following years including 1969.

Agee did have a fine year with the glove in CF, as team defense was probably the Mets best ever up to that point. Bud Harrelson was the slick-fielding shortstop. Catcher Grote may have been the most valuable of all on defense, giving up just one PB in 115 games behind the plate and throwing out a very impressive 30 runners in 69 SB attempts. Grote was also excellent at calling the game and steadying the young pitching staff.

Three Mets made the All-Star team. Koosman and Seaver both pitched, and Grote was voted in by the players as the starting backstop, beating out Johnny Bench among others. Seaver pitched two scoreless innings with five K’s, and Koosman got the save as the NL beat the AL, 5-3.

We have mentioned several key newcomers to the team, but here is one more, namely manager Gil Hodges. Hodges worked patiently with the young team, and also recommended the team acquire Agee. Hodges had managed against Agee in the AL with the Senators and was aware of his great defense and hitting potential. The Mets sent Tommy Davis and some throw-ins for Agee and infielder Al Weis, both of which were to be important parts of the ‘69 team.

Even though the ‘68 Mets finished 9th, the groundwork was laid for the sensational ‘69 season, when the Mets racked up 100 regular season wins and a 4-1 WS victory over the powerhouse Baltimore Orioles.