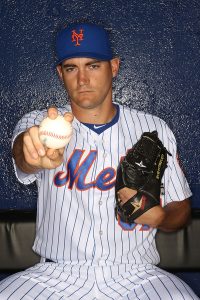 There hasn’t been a ton of news so far in Grapefruit League play on Seth Lugo. That may be a good thing, as the attention for the most part has been on injured guys and a guy who was pulled from the starting lineup because he showed up late. No one should want bad attention. But Lugo has had two good appearances, one start and one relief outing, and if he’s pitching for a spot on the Opening Day roster, he’s doing exactly what he needs to do.

Lugo opened the 2017 season on the DL, thanks to an injury to his pitching elbow. He opted for rest and rehab over surgery and was able to come back the second week of June. At that time, the news was that he was going to be in the rotation, as the normal routine of a starter would be easier on his elbow. His first four outings were good, containing three Quality Starts, a 3-1 record and a 3.55 ERA. But his final 15 games were not so hot, as he had a 5.09 ERA over his final 76 IP of the year.

There was no offseason surgery for Lugo, who hoped more rest would be enough. He faced an uphill climb to earn a starting rotation slot in 2018, one made even more difficult with the acquisition of Jason Vargas, who seemed to be gifted one of the five spots despite a second half of 2017 even worse than Lugo’s.

The question remains if the Mets feel that Lugo is healthy enough to pitch out of the bullpen in 2018.

He still can be optioned to the minors, meaning they can send him to Las Vegas to work as a starter if they’re still worried about him pitching in relief. But a new manager and a new pitching coach and Lugo’s somewhat frail nature may be a perfect storm to create the role that may be ideal for all parties – a reliever who pitches multiple innings once or twice a week.

In the previous administration, the bullpen motto was all hands on deck whenever humanly possible. If you pitched in three of the last four games, you were available. The two leading principles in bullpen management was to put lefty relievers in the most advantageous position possible and to use the closer in ninth inning save situations. After that, it was a free-for-all.

Perhaps now, Lugo can be used out of the pen for two-to-four innings at a time, with multiple days off between appearances. It’s a set up that works even better if you have at least one other guy in the pen on the same schedule. Robert Gsellman, Rafael Montero and Zack Wheeler would all fit this bill. They wouldn’t have to be necessarily low leverage innings, either. Modern fans point to Andrew Miller but the greybeards remember when each team had guys like this.

For the Mets, you need to look no further than Tug McGraw. In his first nine games of the 1971 season, he pitched two innings or more eight times, including four inning stints in back-to-back games on 4/23 and 4/30. And the one game where he didn’t pitch two innings, he threw 1.2 IP and recorded a Save. Four of those nine games had an aLI over 2.0 and he had a WPA over 2 in those games! McGraw was 11-4 with a 1.70 ERA and a 1.071 WHIP in 1971 and finished second on the staff with 8 Saves. From 1969 through the end of his Mets career in 1974, McGraw tossed 615.1 IP in 305 games. Now, it’s a touch misleading because he made 11 starts over those six seasons. Still, he was comfortably over an inning per appearance, even after you remove the starts.

Speculation has the Mets beginning the year with eight relievers, a plan that makes sense as Michael Conforto is likely to open the season on the DL. Four spots seem to be locks, with Jeurys Familia, AJ Ramos, Anthony Swarzak and Jerry Blevins claiming those. It’s likely that Montero and Wheeler claim two spots, with the former being out of options and the latter unlikely to be sent to the minors.

That leaves a group including P.J. Conlon, Gsellman, Lugo, Matt Purke, Hansel Robles and Paul Sewald competing for the last two spots. Conlon and Purke are the lefties and last year we would have given the edge to one of them making the roster. Sewald pitched well last year, which you would think would give him a leg up. He’s also pitching well here early in Grapefruit League action. Meanwhile, neither Gsellman nor Robles has impressed early on in Florida.

My reading of the tea leaves has Lugo and Sewald grabbing the final two spots, with Gsellman drawing the short straw to pitch as a starter in Las Vegas. Sewald becomes the low leverage/fill-in guy while Lugo joins Montero and Wheeler to function as multi-inning relievers, with the other four relievers mixing and matching as needed to close out games.

Some will fret that a bullpen with only one lefty will be a giant handicap. Those people tend to be those who aren’t happy unless they are complaining about something or people who think that RH relievers are incapable of retiring lefties, despite all evidence to the contrary. Blevins is still around for the biggest left-on-left matchup(s). And would you rather see Purke or one of these guys:

The Mets’ front office made the decision that another starter was more valuable than a second lefty reliever, which is why the club signed Vargas instead of, say, Tony Watson. Maybe you feel like Watson would have been preferable. But that’s not where we are today. Purke seems like insurance in case of an injury to Blevins, rather than as someone who should appear in 50-plus games. We shall see.

But assuming his elbow is healthy enough for the job, the idea of Lugo – and others – pitching multiple innings at a time out of the pen seems like a good thing. Now it’s up to Mickey Callaway and Dave Eiland to make it work. The fact that Callaway was in on the Miller experience should give everyone confidence that he can manage the load for Lugo and the other starters working out of the pen.

16 comments on “Seth Lugo and starters in the bullpen”