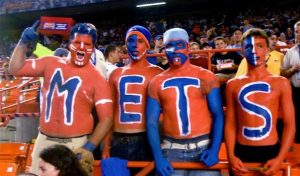 It feels like the third or fourth year in a row I’ve written this piece. The Mets have hit a rough patch and fans are despondent. It’s a familiar refrain – the crushing disappointment of injuries, underperformance, losses, and clubhouse drama while the crosstown Yankees are tearing it up and some of our division rivals are starting to heat up. Say it with me, it’s a long season.

Yes, it could wind up like last year with mounting injuries and a big summer sell-off. Or, it could wind up like 2015 where the team plays well enough to warrant a few in-season acquisitions, everything falls into place in August and we make a playoff run. Since it’s still May and we’re over .500, the latter seems like a better outcome to hang our hats on.

We’ve been lousy lately, there’s no denying that. Thankfully, a hot early start has kept us from really falling out of the race early. We’re a little banged up and have a few guys fighting through slumps. It happens. We still have a great 1-2 rotation punch, a deep bullpen and a solid nucleus of bats, once a few more of them come around. And things are starting to look up. Thanks to some off days and rainouts, our bullpen is a little more rested. We have a new catcher who our pitchers seem to like throwing to, and, get this, he gets a hit every now and again. Michael Conforto, Amed Rosario, and Wilmer Flores are starting to hit. Juan Lagares is hot. Steven Matz and Zack Wheeler are both healthy at the same time. The Matt Harvey distraction is behind us. There’s even talk that David Wright may soon resume baseball activities. Imagine the boost of adrenaline even a few at bats from the captain would give this bunch?

Have faith. As Ron Darling always says, players eventually revert to what’s on the back of their baseball card. Jay Bruce and Yoenis Cespedes will combine for 60 or 70 home runs. And with an effective Conforto in front of them, this crew will get back to scoring runs. Jason Vargas has been effective for too long to be this bad. He’ll get it straightened out. Same goes for Jerry Blevins and AJ Ramos. With Mickey Callaway and Dave Eiland working with a reasonably healthy pitching staff at least one of Matz or Wheeler has to turn the corner.

A closer look at our division rivals shows cracks. The Braves and Phillies got hot, but they don’t have the depth or experience to sustain it yet. The Nationals, while more talented from top to bottom, are already fighting through lineup injuries which they can overcome, but inevitable rotation injuries will spell doom as they no longer have any depth of arms. And that brings us to the number one reason why the Mets will turn this around.

If Vargas doesn’t straighten out and/or Matz or Wheeler can’t turn the corner, we have two effective, proven guys ready to step in with Seth Lugo and Robert Gsellman. With Anthony Swarzak coming back and plenty of reliever depth in AAA, the Mets will soon have the option and luxury to push one of them into the rotation.

By the end of June we’ll know where this team stands and if we “qualify” for trade deadline shopping. There’s a whole lot of baseball to be played between now and then, so keep rooting and don’t despair, at least not yet.

7 comments on “Mets fans, keep your chins up”