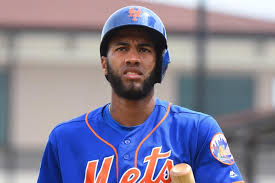 Since the middle of June, Amed Rosario has been on an offensive hot streak. And while his hitting has taken a huge step forward, his defense has gotten a bit better, too. Most likely because of his offensive outburst, the talk of his moving to center field has died down some here lately. Is he still taking balls in center? Through games of August 3, the average NL SS has a .763 OPS while the average NL CF has a .731 mark. And the Mets don’t have an immediate replacement at either position.

The hits are falling in right now for Rosario, who has a .402 BABIP in his last 39 games and 154 PA. In that span he has a .355/.392/.518 slash line for a .910 OPS. What’s helping to drive his performance in this stretch is his performance when the opposing pitchers have attacked him with a slider. While he still is chasing too many pitches outside of the strike zone, he’s now holding his own when he sees a slider while earlier in the season that pitch was giving him fits. Rosario has done well all season against four-seam fastballs and this new-found “success” against sliders gives pitchers one fewer go-to pitch.

Of course, the problem is that we’ve seen a performance like this from Rosario once last year and it didn’t seem to have any carryover. From August 10 to September 14 last season, a span of 32 games and 142 PA, he had a .333/.366/.526 line. Before that he had a .619 OPS in 383 PA and in the final two weeks of the year he had a .538 OPS. So, is this just another six-week hot streak that we see hitters enjoy when the planets align or is this the start of something better? That question can only be answered with time.

Meanwhile, we’ve seen some improvement defensively, too. It’s important to note two things here. First is that defensive stats take longer to stabilize than offensive ones. And the second one is that we don’t have the ability to dice defensive performance in as precise ways and days that we do with offensive numbers.

But, we see that Rosario made 10 errors in his first 33 games and has made four errors in his last 71 games. Subjectively, it seems there are fewer cringe-worthy moments here recently and he’s also made a couple of nice plays on hard-hit balls.

Statcast has many more defensive numbers available for outfielders than it does for infielders. One of the things it does have for infielders is how well they do on fly balls. Here is the chart for Rosario on those balls hit in the air: 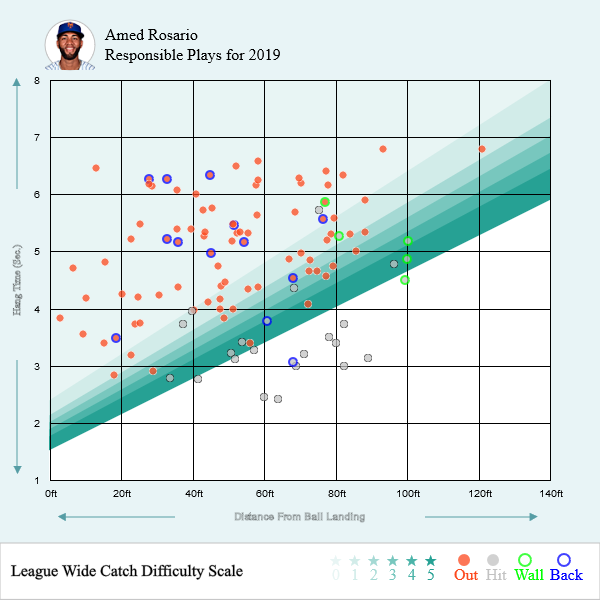 As long as we’re looking him up on Statcast, let’s check in on some of his offensive numbers. Both his Exit Velocity (90.1) and his launch angle (9.8) are improved from a season ago. And in last night’s game, he had three balls his with an Exit Velocity of 97 and above.

What does it all mean?

The answer to that is far from neat and tidy. We’ve seen his good offensive numbers bunched together in the last six weeks. And we’ve seen his worst defensive performance, at least from an errors’ perspective, came from April 16 to May 7, when he committed 10 errors. Rosario’s overall defensive numbers are lousy. But they’re lousy in no small part because of three weeks where he was abysmal. On the flip side, Rosario’s offensive numbers look solid overall (103 OPS+) but his hitting the last six weeks has upped his season-long OPS 78 points.

Can a season be defined by a short stretch where a player was either terrible or tremendous? How long should we hold a bad stretch against a player? How long should we let a hot streak influence our thoughts about a hitter? There are no easy answers to those questions. But right now how you answer those will go a long way in determining how you view Rosario. My opinion is that we don’t have enough information – either this year or in his MLB career – to make any definitive statement.

And those who’ve made up their mind are jumping the gun, both offensively and defensively.

10 comments on “The bad and good streaks of Amed Rosario”