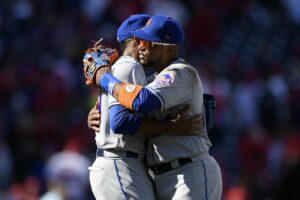 This time last year the buzz was all about the reported trade between the Mets and Mariners, one that wouldn’t be official until December 3. If you just woke up from a year-long coma, the Mets sent Gerson Bautista, Jay Bruce, Justin Dunn, Jarred Kelenic and Anthony Swarzak to the Mariners for Robinson Cano, Edwin Diaz and $20 million. It looked like a bad deal at the time and the reality was far, far worse.

It was spun by the Mets as a win-now trade, one that filled two primary needs for the team while keeping Diaz away from the Phillies, who were also in pursuit of the closer coming off perhaps the best year of any reliever in 2018. Of course, when only one side gets to present their case, you don’t get the whole picture.

The Mets were handcuffing their future payroll by agreeing to take on the final five years of Cano, adding a $20 million per year commitment to a player almost guaranteed not to be worth the expenditure over the life of the deal. They also sunk a lot of resources into acquiring a reliever, a position well-known for being very fickle in results from year to year. Finally, they raided their farm system to make the deal happen.

So, how did the trade play out? Let’s look at the participants.

Cano was bad for the majority of the year, injured for a fair amount, suffered several instances of an extreme lack of hustle and yet somehow managed to hustle one time and crash into Michael Conforto and give him a concussion. Conforto had a .931 OPS at the time. After missing nine days, Conforto returned to the field but for the next two months put up a .729 OPS, sinking what had been shaping up as a signature season.

For the season, Cano put up a .736 OPS in 423 PA. It was the second-worst OPS of his 15-year MLB career. He was a dependable fielder and proved very good turning the double play but his lack of range dragged down his defensive numbers. And he was a horrible baserunner. Overall the combination led to a 0.8 fWAR, a mark that FanGraphs computed as being worth $6.1 million. And the assumption by everyone was that while Cano would likely be an anchor at the back end of the deal, he would be an asset the first two seasons. Woops.

Kelenic played at three different levels, ending the year in Double-A, where he put up a 133 wRC+ in 92 PA as a 20 year old. It may have been defensible at the time of the trade to believe that Kelenic was four years away from contributing to the majors. But after his standout season, he’s now one of the top 25 prospects in all of the game, with a likely ETA of 2021 and an outside shot of making his MLB debut in this upcoming season. Oh, and he’s a center fielder, the position that the Mets need the most help in both the majors and the high minors.

Dunn went back to Double-A and shaved over a full walk from his BB/9 rate and got a cup of coffee with the Mariners at the end of the year. In four games, he put up a 2.70 ERA, albeit in just 6.2 IP. MLB.com lists him as Seattle’s fifth starter on the Mariners’ depth chart, a role he could easily play on the 2020 Mets, too, given the club’s other options here with the overwhelmingly likely departure of Zack Wheeler.

Bruce put up a 0.6 fWAR in 98 games and 333 PA while Swarzak put up a 4.56 ERA and a 1.481 WHIP in 53.1 IP. Those two players were thrown into the deal as a partial salary offset for Cano. But the two of them essentially duplicated what Cano and Diaz gave the Mets in 2019. They could have kept what they had and gotten equal production. And the pay would have been fairly even, too. Swarzak’s contract would be off the books now and the Mets would be left with Bruce for one more year at $14 million.

Bautista was awful but he missed half of the season with a pectoral injury.

All in all, this trade could hardly have worked out worse for the Mets. They gambled that Cano would buck the odds and be a productive 2B at age 36. And they lost badly on that bet. They wagered that Diaz would be able to remain one of the game’s elite closers and that one was a miserable failure, too. And for the cherry on top of this particular sundae, Kelenic played even better than his strongest supporters would have imagined, as no one expected he would succeed up to and including Double-A in 2019.

Brodie Van Wagenen’s first big move was a failure from a production standpoint and it was worse on two other levels. The huge amount of money sunk into Cano has painted the Mets into a corner financially. They could have retained Wheeler with that money or paid for a younger, more productive player elsewhere. And they traded away a future stud at the position where they need help the most.

Van Wagenen made some good moves his first year on the job but all of the good he did elsewhere gets completely wiped out by this one unbelievably awful transaction. Not every trade is going to work out the way that you hope it does. But you want to make deals that make sense at the time, in addition to working out good in the end. This one looked bad at the start and accelerated downhill in reality.