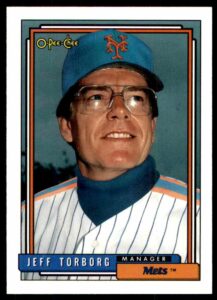 Carlos Beltran is in the New York Mets record book for a multitude of different categories. He is third in position player WAR for the team all time, sixth in home runs, and fourth in OPS. Beltran will also be remembered for taking strike three against the Cardinals in Game 7 of the 2006 NLCS. Now, Beltran holds a new record for the New York Mets, curtesy of the recent Houston Astros cheating scandal. Beltran officially had the shortest tenure as New York Mets full-time manager, having left the position before even managed a game. This takes the infamous title away from Jeff Torborg.

As a player, Torborg’s numbers don’t exactly jump out at you. A South Plainfield, New Jersey native, Torborg embodied what it was to be a ball player from the Garden State. He was an all-state catcher for Westfield High School, and attended Rutgers, where renowned Jersey boy Todd Frazier later attended. Torborg’s time at Rutgers could be described as nothing short of legendary. His 1963 season consisted of him earning All-American honors, recording a .571 batting average with a slugging percentage of 1.032. This would eventually lead to Torborg having his number retired by the Scarlet Knights, cementing him as a legend of the program.

At the end of his collegiate career, he signed on with the Los Angeles Dodgers. Like many talented collegiate players, Torborg struggled to translate his game to the major league level offensively. He went on to have a pedestrian 10-year career, never reaching more than 255 at bats in a season. The highlights of his career came through playing with two legends on the mound. On September 9th, 1965, Torborg was behind the plate for Sandy Koufax’s perfect game. Later in his career as a member of the California Angels, Torborg was behind the plate for the first of Nolan Ryan’s seven no hitters. It was after that 1973 season that he decided to call it quits as a major league player.

It only took until the 1977 for Torborg to be hired as a manager, and at age 35, appeared to have a bright future ahead of him as a manager. The Cleveland Indians were the first team to give him a chance, and in the 358 games he was manager of the Tribe, he compiled a 157-201 record. Once relieved of his duties, it took him awhile to get back to the manager position. He latched onto the New York Yankees, where he was a coach with the team from 1979-1988. Although these were known as the Don Mattingly years, this was the first decade for the Yankees that they had not won a World Series since the 1910’s. Following the 1988 season, Torborg was hired as the manager of the Chicago Whitesox.

Following a mediocre 1989 season, Torborg finally had the season that he had been waiting for his whole managerial career. He improved his team’s win total by 25 games, and managed a team led by Carlton Fisk and Frank Thomas to a 94-68 record, and fell nine games out of a playoff spot to the eventual AL Champions, the Oakland A’s. Torborg then stayed one more season in Chicago, before he made his way to Flushing to lead the New York Mets and take over for Bud Harrelson.

With the arrival of Torborg also came the arrival of Bobby Bonilla. That served to be a bad omen for not only Torborg, but also the franchise. His first season, the top player by WAR was Sid Fernandez with a 6.3, but that was about all that went right for the team that season. They finished with a record of 72-90, and the dubious moniker of “The Worst Team that Money Could Buy.” Torborg lacked any true control of the players. There were scandals riddled throughout the team, and Torborg provided no aid or relief to that. 1993 started out as poorly as 1992 had played out, so Torborg eventually was fired after opening the season with a 13-25 record, and truly opening up a stretch of darkness for the franchise.

Although Beltran never managed a game for the Mets, it truly would have been interesting to see how he fared. There were many different opinions on his hire, and now we’ll never be able to see how he would have panned out. However, with information that becomes crazier and crazier by the day as it comes out about the Astros scandal, it was for the best that the Mets rid themselves of the burden before the promising 2020 season started, rather than during it.

Carlos Beltran never got to manage a game for the New York Mets following his involvement in the Astros scandal.
Jeff Torborg was the shortest tenured manager in Mets history.
Torborg caught both Sandy Koufax’s perfect game and Nolan Ryan’s first no hitter.

2 comments on “A look at Jeff Torborg, the previous shortest-tenured Mets manager”

Leave a Reply to Pete from NJ Cancel reply