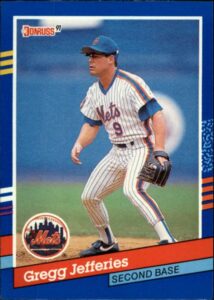 It is always interesting and exciting to hear about the best fielders. Rarely do we get a good look at the terribly bad fielders. Derek Jeter is always mentioned as a terrible fielder and having the worst negative performance of any fielder.  This has some bias toward the good hitters, like Jeter.  In looking at the worst fielders the Mets have ever jogged out there, it is important to standardize based on chances, while keeping an eye on small samples. Pitchers and catchers aren’t included in this because we’re going to examine batted balls, and pitchers and catchers have very few chances to field those, and no one likes to hear anything disparaging about Mike Piazza’s time behind the dish.

Data from prior to 1988 is limited to Retrosheet data, while the most recent 30 years we have RED (STATS zone data-based), UZR and DRS (last 18 years).

Standardizing chances to 400 levels the playing field, as middle fielders – shortstop, second base and center field – get close to 500 chances, but the corners get between 250 and 400.  This keeps Darryl Strawberry from immediately being the worst, simply because he played the most innings in right field for the Mets.

First base is the position which gets the fewest ground balls to field, which makes it difficult to really damage the team defensively.  That does not mean the Mets have not tried.  We all remember the ill-advised idea of moving Piazza out from behind the plate to first, to improve his defense.  It did not work.  Marv Throneberry was nicknamed “Mr. Strangeglove” for his reputation as a poor fielder, but he only spent 800 innings at first for the Mets. It will not surprise many to learn Dave Kingman caused the most damage at first base for the Mets at -22 runs, but he played more innings than our “winner”.  Mo Vaughn coughed up 20 runs, and did it in fewer innings, at a pace of -12 runs per 400 chances.  Vaughn was such a bad fielder; he defines the limit – what’s the worst you can be and still be allowed to play.

At second base, when looking for a good fielder, there really were not many choices, and they were not particularly good.  For the “skillet” award, the Mets have several to choose from. Luis Castillo was not good, Roberto Alomar was bad, but the worst two really battled it out.  Daniel Murphy just missed being the worst fielding second baseman for the Mets.  The honor goes our favorite wunderkind, Gregg Jefferies.  Jefferies was a very bright spot in 1988, but simply could not find a position to play competently, and that spells doom in the NL.  Jefferies, once he left the Mets, moved to first base and left field.

Third base has long been a hole for the Mets.  In the team’s first 20 years, 46 Mets played third base for at least 10 games. In the 80s broadcasts, this was a constant note every time a new hope took his position at the hot corner. Hubie Brooks, Howard Johnson, Dave Magadan, Gregg Jefferies, Bobby Bonilla. The ensuing 20 years, 1982-2001, a mere 33 different Mets played 10 or more games at third. And in the last 18, since David Wright stepped on the field, only 25 Mets managed the feat.  That is 120 players with ten games at third. The Phillies, *since 1883* have only had 169 different players, with just 76 during the Mets’ existence (Pirates 79, Cards 81, Cubs 93, to round out the old NL East).  With so many players cycling through the position, only a few can accumulate any innings to really stand out as a poor fielder.

Fortunately (?), the Mets happened to put one of the worst defensive players across all positions all years at third base for nearly 2000 innings.  No, not Bonilla – he was not bad. Not Howard Johnson, who was quite bad. In second place for the worst third baseman over 1000 innings and per 400 chances is Jefferies, but that would be too cruel.  The worst fielder for the Mets at third base, costing nearly 20 runs per season’s worth of chances is Ty Wigginton. Wigginton was kind of this Ron Cey looking character, who could seemingly hit a little, but was just too slow on defense.

Shortstop has had none of the same issues. Only 80 players have been at short for 10 games for the Mets since 1962. The names have been reasonably stable for a few seasons.  As for poor fielding, the Mets have had surprisingly good fielding at shortstop, and if they did not, the Mets have not kept playing them at short.  Somewhere there is an odd mindset in the Mets front office about how important the shortstop glove is as compared to second or third base. There is only one shortstop with double digit performance underwater.  Asdrubal Cabrera was not good, but at least he could hit.  The other shortstops in the below average area – Jose Vizcaino, Wilmer Flores, Ruben Tejada, Rafael Santana – were all in the “close enough to average” category.

Left field has always been a merry-go-round for baseball teams. Where can we get the biggest bat doing the least amount of damage in the outfield? The Mets acquired 40-year-old Rickey Henderson for the 2000 pennant chase, and he was bad.  Unbelievably bad. But a good deal of his poor runs saved is tied to a weak arm, rather than a pure inability to get to fly balls.  Benny Agbayani has the worst run of chasing down flies, followed closely by Roger Cedeno.  Cedeno was also terrible in right field and center. This is a real toss-up for this – Henderson had just over 1,000 innings and spilled 20 runs all over the field, where Agbayani just lacked the ability to close and make catches at -17 runs per season.

In center field, the Mets have done a good job of keeping the bad players out of there. It is easy to picture Howard Johnson flailing away, but he only had 700 innings in center.  Mookie Wilson struggled too, mostly due to a weak arm. The interesting part is here is where the old-timers get to represent the Mets. One of my favorite players as a kid landed right at the top of poor center fielders.  Lee Mazzilli was a bad center fielder when he was young, which is an unusual thing to pull off.  Youth has speed and reaction times, and yet, Mazzilli was still not particularly good. He was not as bad as other positions, only losing ten runs per 400 chances, which, given the other positional performances was not too bad.

Right field was patrolled by many a Met fans favorite, Le Grand Orange. Rusty Staub was a nimble, round fielder, with a quick throw, and his assist numbers often lead people to think of him as a good fielder.  Misplays to the outfield often present assist opportunities as runners try to take the extra base.  Staub was not adept at flagging down balls, and did not catch flies well, losing about 20 runs to the league average a season.  Fortunately, the Mets opted to play another first baseman out of position in right field.  Another bat who the Mets felt could “hold his own” in right.  Lucas Duda could not. Duda cost the Mets over 25 runs per 400 chances in right, making him the worst fielder the Mets have allowed to play for over a thousand innings. At least Staub fans do not have to hear “he was the worst fielding right fielder the Mets ever had.”