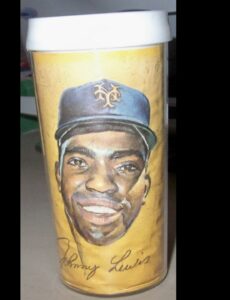 Back in 1966, the Mets weren’t considered a good team but they did participate with a few other major league teams in a gas station plastic cup giveaway promotion. That year, the Mets joined the Cincinnati Reds, the Cleveland Indians, the Detroit Tigers, and the Los Angeles Dodgers in giving away these cups featuring the baseball sports portraits of Nicholas Volpe.

In 1966, Lewis was coming off his best professional season in which he had hit 15 HRs, 45 RBIs, and batted .245. He played both right field and center field and was considered to have one of the best arms in the league. His throwing prowess led to his nickname, “The Gunner”. For Mets fans, he is often remembered for beating Jim Maloney and breaking up his extra-inning no-hitter.

Some people might look at Lewis’s career and say that he didn’t live up to his potential but he survived the tragic loss of his wife early in his career while with the Cardinals and later returned to them as a coach, scout, and minor league manager.

These cups aren’t too costly if you can find them. The most expensive being the Berra cup which could cost around $50-75 dollars in excellent condition. This Lewis cup could run between $10-25 dollars.

Here is toast to the memory of Johnny Lewis and the 1966 Mets!