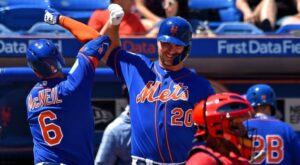 Some teams can afford the luxury of two superior players who play the same position. The last-place Mets are not one of those teams, they have a few too many needs that could be filled by dealing either Pete Alonso or Dominic Smith, both first basemen. For this article we will focus on the benefits of trading Alonso, and what might be the reasonable return for his services.

We do know that Smith produced a .316/.377/.616 line, including 10 homers and 21 doubles in the seriously shortened season. He has been consistently good ever since he controlled his sleep apnea medical problem a few years ago. He is a better fielder than Alonso at first base.

Alonso will still have plenty of value, He did still hit 16 homers this year and Statcast recorded an exit velocity of 118.4 on one homer he hit, at the top of velocities this year. He’s relatively young and considered to be an excellent teammate.

There are potential trade partners out there, teams that could use an upgrade at first. We’ll examine three of them, in no particular order, and see what they could offer the Mets.

The Los Angeles Dodgers had the best regular season record in the league this season, but they did have a glaring hole in their lineup at first base. Veteran Max Muncy was the regular first sacker, and his line was an abysmal .192/.331/.389. The Dodgers have plenty of depth at positions such as catcher and starting pitching, areas of need for the Mets.

Will Smith is the starting catcher for the Dodgers, and they are not going to trade him, he could be another Johnny Bench. Veteran catcher Austin Barnes is on the roster, and he saw plenty of action this year because of an injury to Smith. His offense is nothing special, but he is excellent defensively with a DRS of plus five. He would make a good bridge to the Mets highly rated prospect backstop Francisco Alvarez, who is still a few years away from the majors. The Dodgers would have to include someone else in the trade, probably a young pitcher like 21-year-old Clayton Beeter who throws a high 90s fastball with good secondary pitches.

The Dodgers have another catcher in their system, Keibert Ruiz, also 21, the number one prospect in their strong farm system. He is another excellent defensive catcher with good contact hitting skills. The Dodgers could package Ruiz with a lower rated pitching prospect for Alonso.

Cleveland is another team that was hurting at first base this year. Carlos Santana, age 34, assembled a slash line of .199/.349/.350. The Indians might well decline his option for 2021. The Indians of late have been well stocked with pitching. The Mets could dangle Alonso in front of the Indians in exchange for Zach Plesac, 25, who was 4-2 with a 2.28 ERA in 2020. His most dazzling stat was his WHIP figure, a microscopic 0.795. The Mets would have to throw in a pretty good prospect as well as Alonso to get him.

Yet another potential trade partner could be the Tampa Bay Rays. Their main first baseman this year was Ji-Man Choi, who had a .230/.331/.410 line. Alonso would be an improvement. The Rays traditionally do not draw fans very well, but Tampa native Alonso could well put more fans in the seats.

Tampa Bay always seems to have good pitching depth. Lefty Blake Snell has been their top pitcher for a few years. He was dominant in 2018, when he won the AL Cy Young. He had a bad 2019, then bounced back this year with a 4-2 record and 3.24 ERA. The Mets would probably have to sweeten the deal to pry Snell away from Tampa, perhaps adding a fairly highly ranked prospect?

Alonso is a pretty high-character player, but the Mets do have holes to fill. Of course, Alonso or Smith could be used as DH, but nobody knows if the DH will be a permanent feature of NL play. Besides there is no shortage of other candidates to play DH at times for the Mets, such as Robinson Cano and J.D. Davis.

It’s not an exact parallel, but the 1960’s San Francisco Giants had two future Hall of Fame first basemen on the roster at the same time, Orlando Cepeda and Willie McCovey. They finally traded Cepeda to the Cardinals for a declining Ray Sadecki, and Cepeda won the MVP as the Cards went on to win the WS.

Alonso has been a great addition to the Mets, despite his big hiccup this year. He deserves to be a starting first baseman somewhere, not a part-time 1b/DH.