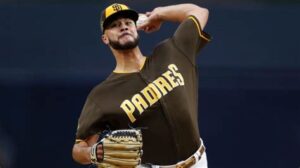 As part of a three-team deal with the Padres and Pirates, the Mets acquired lefty starter Joey Lucchesi Monday night.

If you like Steven Matz, you’ll probably dig Lucchesi, too. Both lefties were essentially league average starters in both 2018 and 2019 before falling apart in the Covid season last year. While Matz had an awful year after a promising Spring Training, Lucchesi was bad even in Cactus League play last year. Unlike Matz, Lucchesi spent time at the Padres’ alternate site and was limited to just three games and two starts in 2020. Matz was victimized by the gopher ball last year but Lucchesi didn’t allow a homer. What he did give up was 13 Hits and 2 BB in 5.2 IP, which led to a 7.94 ERA. For what it’s worth – not much in this ultra tiny sample – he had a 3.01 FIP last year.

Lucchesi throws a two-seamer and when right gets a good number of ground ball outs. His primary offspeed pitch is a changeup and he also mixes in a cutter. Lucchesi’s first two years in the majors (’18-’19) he amassed 303 Ks in 293.2 IP. There’s definitely talent here and 2020 is something of a mystery. There were no reports immediately available about an injury.

As you might expect from a lefty who’s had MLB success and still has three years of control, the cost was not cheap. The Mets sent switch-hitting catcher Endy Rodriguez to the Pirates to get Lucchesi. Rodriguez split 2019 between the DSL and the GCL, putting up a .293/.393/.453 line in 89 PA in his U.S. debut as a 19 year old. Rodriguez also played 1B and the OF, so it’s far from certain he’ll remain behind the plate. Still, MLB.com had him as the Mets’ 14th-best prospect.