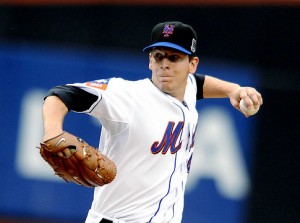 When trying to figure out the makeup of the relievers on the staff, does it make sense for the Mets to have someone who can regularly pitch multiple innings in case a starter gets knocked out early? If the answer to that question is yes, that helps Dillon Gee and Pat Misch in their quests to make the Opening Day roster.

Last year, a Mets reliever pitched more than two innings in an appearance 22 times. However, most of the guys who did that are no longer on the club. Raul Valdes led the way with nine such appearances, while Hisanori Takahashi had five. Fernando Nieve (3), Elmer Dessens (1) and Tobi Stoner (1) are the other pitchers no longer around who had extended outings out of the pen.

Only Francisco Rodriguez, Manny Acosta and Oliver Perez, with one extended outing each, have a chance to return to the Mets bullpen in 2011.

The expectation is that with neither John Maine nor Perez in the starting rotation, the Mets will have fewer bullpen-killing outings from their starters this year. The flip side of that is with Chris Capuano and Chris Young coming back from major injuries, there is still a chance for a starter to go down on a regular basis and having someone who won’t blink if asked to pitch multiple innings is still a worthwhile thing for the Mets.

It’s likely that Rodriguez, Bobby Parnell and D.J. Carrasco have bullpen slots locked up. And it is almost unthinkable for a bullpen not to have a LOOGY in 2011. That leaves three slots remaining and multiple relievers vying for those positions, including Acosta, Pedro Beato, Taylor Buchholz, Gee and Misch.

Most assume that Buchholz has a slot. If Beato is impressive during Spring Training, he really forces the issue, as he is a Rule 5 pick who has to be offered back to Baltimore if he does not make the roster. In that case, Acosta, Gee and Misch are fighting for the final spot. Acosta went three innings in one appearance last year and could technically fill the long reliever role.

But what if Sandy Alderson and Terry Collins decide a long man is a necessity, a position to be filled first rather than last? Then they choose between Gee and Misch, with Acosta, Buchholz and Beato fighting with the long-man loser (and perhaps other LOOGY candidates) for the final two positions in the pen.

One other factor to consider is that Carrasco is also capable of going extended innings, having done so five times last year. Even Buchholz went 2.2 IP in one of his nine outings last season. Could the combination of Acosta, Buchholz and Carrasco be enough to forego a long man?

My guess is that the Mets will be flexible with having a long man in the bullpen. If Beato shows enough to merit a roster spot, they will do without a traditional long man. But if the Rule 5 pick is not worth keeping, they will opt for Misch instead. The veteran lefty being out of options has two advantages over the righty Gee, who can be sent down to Triple-A to continue working as a starter.

Only one thing is certain: Those that start the season in the minors are likely to make it to Citi at some point during the season. Last year the Mets used 20 pitchers and only four of those pitched exclusively as a starter. In 2010, the Mets bullpen had 182.1 IP thrown by relievers who were not on the Opening Day roster.

2 comments on “Do the Mets need a long reliever?”