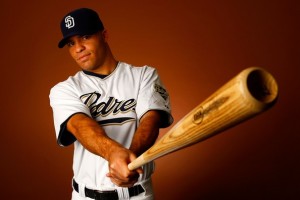 A month-and-a-half after being non-tendered by the Padres, the Mets signed Scott Hairston to a one-year, $1.1 million deal, with an extra $400,000 in performance bonuses. Hairston, who played in 104 games for the Padres last year, should be the Mets’ fourth outfielder. He has some sock in his bat and is capable of playing all three outfield positions.

This move has been met with a collective yawn by the fan base. What has probably drawn the most reaction is who the Mets (did not) cut from the 40-man roster to make room for Hairston. With the additions of Hairston and Chris Young, the Mets cut Jason Pridie and Tobi Stoner from the roster. Some felt this was the perfect time to cut Luis Castillo and Oliver Perez.

I’d like to compare Hairston to another Mets outfield acquisition from the recent past. Here are their numbers in the year before being acquired by New York:

Pretty similar, wouldn’t you say? Okay, how about their lifetime marks?

Again, these guys look pretty similar. How are they defensively? Last year, Hairston saw the vast majority of his time in LF, where he had a -3 DRS and a -7.7 UZR/150. Previously he had been a solid defender, with a lifetime UZR/150 of 7.2 in LF and 7.7 in CF.

OK, since neither guy was acquired to be a starter, how were they at pinch-hitting?

Speed? Hairston was successful on six of his seven SB attempts last year and has a career-high of 11 SB. Player A came to the Mets successful on four of his five SB attempts the previous year and had a career-high of 18 SB. Power? Hairston had back-to-back 17 HR seasons before hitting 10 last year. Player A had back-to-back years of 19 and 18 before hitting 4 HR the year before he joined the Mets.

These two guys seem on the surface to be pretty similar. Have you figured out who Player A is yet? It’s our old favorite, Gary Matthews Jr.

Now, there are certainly reasons to prefer Hairston, not the least of which is that he is four years younger than Matthews was when the Mets acquired him. Also, Matthews came with two years remaining on his contract, with the Mets responsible for $1 million per year.

But Omar Minaya was raked over the coals for acquiring Matthews while the Hairston deal has barely registered. Last year the club was in more need of having a backup center fielder on the roster, with Carlos Beltran out for an unspecified time and only unproven Angel Pagan on the roster. This year, Beltran is supposed to be ready at the start of Spring Training and Pagan has proven he can handle CF on a regular basis.

I want Hairston to come in and hit like he did in the first half of 2009, when he had a .299/.358/.533 line in 216 PA. But the reality is in 584 PA since then, Hairston has hit for some power (17 HR in 528 ABs) but has delivered very little of anything else, including a .222 AVG. He has shown no special PH ability and last year’s defensive numbers, while not definitive of a decline, are at the very least worthy of an eyebrow raise.

Hairston seems like a perfectly reasonable fourth OF, although perhaps a bit expensive for a team counting every nickel and dime. The fan reaction to his signing seems appropriate. Hopefully he will give the Mets more production than Matthews did last year and not strike out in 41.4 percent of his ABs.

The silver lining is that at least he won’t start over Pagan on Opening Day.

One comment on “Is Scott Hairston a good fourth outfielder?”