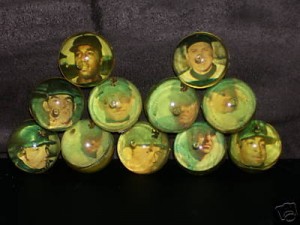 My memories of these are tactile.

They were sold in league-specific vending boxes, 144 of them packed together. And after a few days on the shelf, the Woodwards and Ferraras greatly outnumbered the Roses and Clementes.

Of course, I was Mets-struck, not star-struck, so I’d happily bounce away an Aaron to get at a hometown star. Seaver, Hodges and Jones were the big names, but the set also included Jerry Grote and Al Weis.

The surfaces were marked by a bas-relief “JAPAN” indicating the country of manufacture, as well as a little crater.

Survival rates for these were generally pretty low. The rubber was cheap, and it tended to become yellow and brittle. 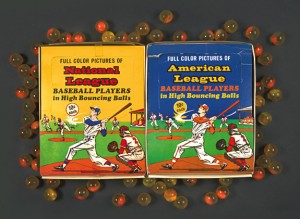 And unlike baseball cards, these superballs actually had utility. They were good for a floor-to-ceiling bounce inside the house, but if you took them outside on the pavement into Wham-o territory, they were basically doomed. They would either split on the concrete, or end up wayward and lost in the grass, where they would eventually meet their end beneath a mower’s scything blades…