It’s no fun to contemplate the Mets without Carlos Beltran but as John Wooden once reminded us, “Failure to prepare is preparing to fail.” Plus with the recent revelations that owner Fred Wilpon thinks Beltran is “65 to 70 percent of what he was” when he signed him, there’s really only one conclusion to be drawn.

So, who replaces Beltran?

Lucas Duda has so far failed to build on his 2010 season, so the main two candidates seem to be Fernando Martinez and Kirk Nieuwenhuis. Martinez has come full circle in prospectdom. He started out as a can’t miss, became overrated due to non-stop injuries, is now an afterthought by many and can be accurately described as underrated. Nieuwenhuis was an unheralded prospect from an NAIA school but has done nothing but perform well in his time in the minors to force his way into the team’s plans.

Martinez came to the Mets billed as a five-tool center field prospect. But injuries have robbed his speed and center is no longer a viable option, nor is big SB totals. But Martinez still offers the club some power potential. While injuries have kept him from playing a full season, he essentially has a full year of time at Triple-A under his belt. Here are his career numbers at Buffalo:

He has 35 2B, 2 3B and 23 HR in 498 ABs at the top minor league level. Martinez is now on his third stint in the majors but for the first time he is actually hitting. Here are his career numbers with the Mets and what he is doing so far this season:

This year Martinez has two doubles and a home run in 18 ABs. 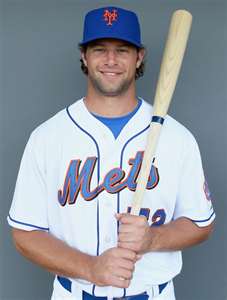 Meanwhile, Nieuwenhuis is putting up strong numbers this year in Buffalo after struggling upon his promotion to Triple-A last year. The Asuza Pacific product is doing a little bit of everything. Here are his 2010 and 2011 numbers at Buffalo:

Nieuwenhuis has 23 extra-base hits in 165 ABs, including 6 HR. Additionally, he has been successful on five of his six stolen base attempts. The 23-year old is also doing his best to show he would fit in with the Mets by having just a .662 OPS with RISP.

Both Martinez and Nieuwenhuis are LHB. Nieuwenhuis is currently playing CF for Buffalo but is somewhat stretched there and probably profiles defensively as a corner outfielder. There were concerns if his bat would play in a corner position but his performance so far in 2011 is a nice sign that it could.

The wild card in this situation is that we are assuming that these two players will battle for the right field position. But if Angel Pagan does not hit better when he returns, Nieuwenhuis could be a contender for the 2012 starting center field job, as well.

But assuming that Pagan is the team’s center fielder next year, right field will offer a nice choice between two different prospects. Martinez is the tools guy, one who is starting to put it together offensively. Nieuwenhuis is the one who has gotten this far on results. This is not to say that he does not have good tools, but that his main draw has been his actual production.

Great tools will get a prospect multiple chances and free passes in the minors but it’s a different story in the majors. Here the only thing that counts is production. Nieuwenhuis would seem to have a leg up here, but it is Martinez who is in the majors right now.

While that has plenty to do with Martinez being on the 40-man roster while Nieuwenhuis is not, we should not disregard the ability to work with major league coaches as a point in Martinez’ favor right now. Next spring, Terry Collins, Dave Hudgens and others will have a comfort level established with Martinez. Perhaps they will get a chance in September to do the same with Nieuwenhuis.

It’s too soon to tell right now who has the inner track to replace Beltran in RF next year. But the Mets have two viable internal candidates, which is a nice thing for a farm system that is allegedly below average (plus an owner who is allegedly broke) to have.

2 comments on “Who replaces Beltran in RF for the Mets?”