Injuries continue to pile up for the New York Mets with Daniel Murphy lost for the season yesterday with a knee injury and Jose Reyes suffering his second hamstring injury. 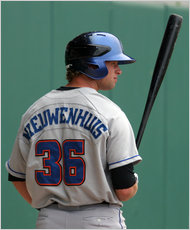 The fourth-year pro could be playing right or center field every day for the Mets. However, due to a non-throwing, left shoulder injury suffered back in May that turned out to be more serious than first expected, the just-turned 24-year-old is out for the season, wasting a year of development.

Nieuwenhuis went on the disabled list after a June 9 injury which was thought to be a minor problem and hasn’t been able to hit the field since. He now joins the likes of righthander Jennry Mejia (elbow surgery), second baseman Reese Havens (various), third baseman Zach Lutz (various) and lefthander Eddie Matz (elbow) among those prospects who have suffered through wasted seasons.

It’s too bad for the youngster and the organization. Had the lefthanded hitter been able to stay healthy, four months at AAA would have given him plenty of seasoning to take over full-time for Carlos Beltran and get a two-month trial heading into 2012 for a team that is looking toward the future.

So, instead of having a full year of development, Nieuwenhuis, who has climbed swiftly through the organization and succeeded at every stop, will likely have to head back to Buffalo next spring to start fine-tuning his game all over.

What do we know about Nieuwenhuis?

1) Collins compared him to Kirk Gibson this spring because of his all-out but balls-to-the-walls approach.
2) The NAIA star has average-to-plus skills across the board and has posted a .906 OPS in his career, two years resulting in mid-season All-Star Game appearances and one postseason selection. He can hold his own in center field or slide to a corner spot and have arm enough
3) The top outfield prospect in the organization – at least in the upper levels – had shown the offensive skills rising swiftly through the minor leagues. He got off to a great start at Buffalo, hitting in 16 straight games and batting .298/.505/.908 in 53 games with 17 doubles, six homers and five steals. He also had a healthy dose of 32 walks. However, he does have an unrealistic .407 BAIP this season and well over .300 for his career.
4) Cutting down strikeouts and hitting fellow lefthanders is a concern: he had 59 punchouts in 53 games at Buffalo and has fanned in over 30 percent of his plate appearances over his career; he’s improved his swings against southpaws during his career, hitting them at a .254/.373/.381 clip in ‘11. At AA last season he hit .294/.348/.518 but went 4-for-32 with a .356 OPS after a second-half promotion to Buffalo.

It’s too bad for the Mets and Nieuwenhuis since Beltran is gone and Jason Bay is about to perhaps be kicked to the curb after the season. New York may have to unwind its tightly-wrapped money belt to bring in a veteran hitter next season instead of using the precious payroll on pitching.

Zack Wheeler’s second Mets start was much better than his first. The 21-year-old tossed six scoreless innings, allowing four hits and no walks with seven strikeouts Sunday for Class A St. Lucie in a 5-2 win against Charlotte.

Wheeler allowed a leadoff triple to start the game but struck out the next three hitters and struck out another batter with a runner on third and one out in the second to help escape that mess.

In his first Florida State League start, the righthander lasted four innings Monday night against Dunedin. He yielded three first-inning runs and four in all on seven hits. The erratic flamethrower did not walk a batter after issuing 45 in 76 games at Class A San Jose.