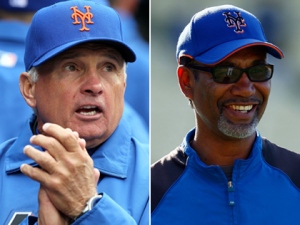 On Saturday the Mets rallied back from a 7-1 deficit to take a 9-7 lead, only to lose 11-9. It’s the type of loss that would have been crushing just a couple of weeks ago and now it’s just one of the many toss-up games that the Mets could have won. It’s just another loss in another season that has slipped away from the team.

Terry Collins received a lot of praise for the way he kept the team together after a 5-13 start. That was proper and Mets360 was among the many sites that extended him kudos. But you know what? The Mets are now 5-14 in their last 19 games and there are few, if any, signs that it’s going to improve going forward.

So, if Collins deserved praise for rallying the team from an abysmal start, what does he deserve for allowing the team to play at a .263 winning percentage the last three weeks?

It’s easy to make a defense for Collins. After all, the injury bug has certainly hurt and the Mets have traded away Francisco Rodriguez and Carlos Beltran. It’s not like Collins is managing with a full deck. Perhaps the best thing to say about Collins is that the team is still giving it maximum effort.

But does Collins really have it any worse than Jerry Manuel did? Last year Manuel had the Mets 11 games over .500 (41-30) before the team finished 38-53 (.418) and cost Manuel and others their jobs. Here’s some of what Manuel had to deal with down the stretch last season:

And this does not take into account the revolving door of suck that was second base and the sub-replacement level that Beltran gave in his first 39 games after returning from the DL, when he posted a .217/.333/.326 line from July 15th to August 27th, with defense to match.

Now, I’m not saying that Manuel deserved another chance. What I am saying is that if it was fair to hold Manuel accountable for the second half of 2010, it’s fair to hold Collins to the same standard.

Last year, the Mets were done in by a dismal month of July, when they went 9-17 (.346). This year’s club will have to turn it up a notch to match that record over an equivalent 26-game stretch. Currently at 5-14, the Mets will have to go 4-3 in their next seven games to match the stretch that essentially got Manuel fired.

From August 1st to the end of the year, the 2010 Mets went 26-32 (.448) and no one gave Manuel any credit for having his team play hard. Do you think the 2011 Mets will play that well over the same time period? So, what’s the difference then? Was the talent level of the 2010 squad better than what Collins has to work with now?

Which brings us to pitching. Last year R.A. Dickey, Jonathon Niese and Mike Pelfrey combined to go 35-28 with a 3.57 ERA. So far this year, that trio is 22-31 with a 4.14 ERA. And the raw numbers do not tell the whole story. This year, offense is down compared to a season ago. In 2010, the NL ERA was 4.02 for the season. So far it’s 3.84 this year. So in a year where the average ERA is about a fifth of a run lower than it was last year, these Mets pitchers are over a half run per game worse than they were a season ago.

We know that the Mets’ offense is better than it was in 2010. We think the manager and general manager are both better than a season ago. So if the Mets finish the same (or worse) than they did in the second half of last year what conclusion can we draw?

My belief is that we need to re-think our opinion of the manager. And after that, we need to give a long and hard look at the pitching coach. If our reevaluation of Collins determines that he’s not to blame for the poor play, than the blame has to land at the feet of Dan Warthen.

If the Mets continue their poor play for the remainder of the season, then either Collins or Warthen should not be here for Opening Day 2012.

12 comments on “Has Terry Collins been any better than Jerry Manuel?”