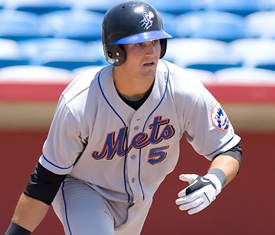 Reese Havens is really good at playing baseball. Unfortunately, Havens is not very good at staying healthy. Since being the 22nd overall pick in the 2008 Draft, Havens has been on the disabled list six times. His injured body parts include: elbow, groin, quadriceps, hand, oblique and back. And prior to this season he had a piece shaved off his rib in an effort to prevent further back and oblique issues.

A college shortstop, Havens has been moved to second base, where if he can stay healthy he has the chance to be a real plus player. He has played 66 games in his career at Double-A and he has a .302/.378/.486 slash line in 278 PA. He’ll take a walk (28 walks in AA) and he can hit the ball out of the park (9 HR, although Binghamton is a good hitter’s park).

But those non-stop injuries have kept Havens from appearing in more than 97 games in a single season. This year, despite two separate trips to the DL, Havens has played in the second-most games in his pro career, with a total of 51 games played.

Everyone has a theory on how to keep Havens healthy but nothing seems to work. Here’s my theory: Screw the injuries.

While the common refrain has been that Havens need to stay healthy to get a shot at the starting job in the majors, it’s my belief that the time has come to turn conventional wisdom on its head. The Mets should promote Havens to the majors and install him as their starting second baseman for the rest of the year.

Let’s face it – the 2011 season is shot. The rest of the year should be spent on evaluating players for the 2012 team. We know that Lucas Duda is an acceptable option at first base, where his bat will play and his defense seems passable. But can he play the outfield? He should be in RF or LF every game for the rest of the year.

The same logic applies to Havens. Can he hack it in the majors? What better way to find out than to have him play for the Mets in the final 35 games of the year. He’s relatively healthy at the moment and the Mets should take advantage of that health – and their miserable slide – and give him a shot with the best coaches and best medical personnel available in the organization, which are presumably in Queens.

Havens is no kid – he’ll be 25 in October. He played three years of college ball and has been in pro ball parts of four other years on top of that. He’s the same age as Ike Davis. Few people complained about the results Davis produced in the majors after being promoted following 182 games and 769 PA in the minors. Havens has more minor league experience than that, with 203 games and 883 PA.

This is not to say that Havens will enjoy the success in the majors that Davis has. It’s only to point out that it’s not preposterous to suggest that he can handle it. Yes, Davis had more success in the minors than Havens has had. But how much of that can we attribute to Davis’ health? Maybe some, maybe none, maybe all – I don’t think anybody knows.

The worst-case scenario is that Havens stays healthy and doesn’t hit. And if that turns out to be the case, Alderson and Collins have had a much more up-close and personal look at Havens to determine if he can be a player in the future. Duda didn’t hit last year and it did not seem to hurt him in the long run.

Actually, the existence of Turner is what makes Havens in the majors so appealing. Turner is a legitimate starter for a major league club at second base. He’s not a star, but he does not embarrass the team by being in the starting lineup. Turner is the perfect caddy for Havens. If Havens is indeed a better player (far from a certain thing at this point) when healthy, let’s play him while he’s not injured, knowing that we have the perfect insurance policy in Turner ready on the bench.

It’s time to promote Havens and hand him the starting second base job.