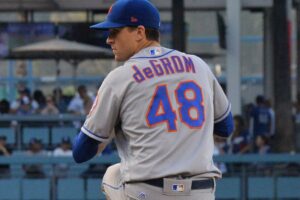 That’s easier said than done. While the Mets have won more of deGrom’s starts this year compared to the horror shows of 2018 and 2019, they’re still not a playoff caliber team.  The offense looks good as the Mets are doing much better with RISP. Jeff McNeil is finding his power and his hits while Pete Alonso is smiling in Polar Bear fashion at another HR to the moon or at least over the Great Wall of Flushing. Michael Conforto has been here for five years and it appears he has finally moved from good to great with flashy catches and hitting the ball the other way consistently, like he does in Keith Hernandez’s dreams. For Dominic Smith, extra base hits galore have made the universal DH a more complicated proposition.

Back to deGrom: he’s only pitched in the post season in 2015 AKA Conforto’s rookie season. The pitcher still had his long hair and the ability to hide behind the louder Matt Harvey and Noah Syndergaard. There’s nowhere for deGrom to hide anymore. His hair has been short for over two years to go with his two Cy Young Awards and counting, and he appears to be only second to Tom Seaver. It’s a second place he’ll likely have forever playing for this franchise as Seaver is the Franchise. Unlike rare playoff appearances, finishing second to Seaver really is an honor.

deGrom is having his age-32 season in a pandemic-shortened 60 games, rather than a classic 162. What is deGrom’s best-case scenario? Perhaps it’s pitching to age 40 as he has fewer innings on his arm than most pitchers considering he transitioned from shortstop to pitcher in college, had Tommy John surgery in the minors, and started his first big league game one month shy of 26. It’s hard to know, but let’s say 40 is his end date. Of course, how long will he remain pitching at his current level? To age 34, 36, or the best case 40? How do the Mets win with deGrom within the next two-to-eight years?

While the offense is good enough at the moment, the pitching surrounding deGrom, both bullpen and rotation, is simply not good enough. No one wants deGrom to become the Mike Trout of pitching as Joel Sherman of the New York Post posited in a recent column.

Luckily for all Mets fans and deGrom, a new owner, Steve Cohen, is on the horizon to sweep away the vestiges of Fred and Jeff Wilpon. This is it. This is the moment to transition to playoff baseball with deGrom still on this team. One can hope he will play here his whole career and his current contract is not the end (2023 or 2024—club opt-out).

So, how do the Mets win with deGrom starting now?

Some believe deGrom could pitch to a bucket, but an upgrade at catcher helps the entire pitching staff. The Mets need a catcher who can handle defense and is not a statue back there a la Wilson Ramos. The dream is J.T. Realmuto as he covers both offense and defense, but hitting is not necessary at this position based on our current offense. If not Realmuto, the Mets should cover their bases with two decent-to-good defensive catchers to platoon or quasi-platoon.

The starting rotation is in shambles with deGrom. 2020 is Seth Lugo’s audition for the 2021 rotation and he’s still cheap with two years left with the Mets. Syndergaard might show in June or July 2021, but the Mets have to be smart and not just assume he will come back from Tommy John in full golden glory. Steven Matz is the question mark of all question marks or maybe he’s just bad. David Peterson is a rookie with fine stuff that has to be on point for him to succeed and he needs more seasoning. Michael Wacha has been noncompetitive and Rick Porcello has been sometimes good and sometimes noncompetitive as well. Moreover, Wacha and Porcello are on 1-year deals.

Making it worse is the Mets’ lack of pitching depth that GM Brodie Van Wagenen traded or designated for assignment (DFA) the last two years including, but not limited to, Anthony Kay, Justin Dunn, Kevin Smith, and Jordan Humphreys. The Mets could re-sign Marcus Stroman, a free agent. There’s also Trevor Bauer, another free agent. Basically, the Mets are going to have to buy 2-4 starters. Without new ownership, deGrom might be going for a third or fourth Cy Young in 2021 and not much else. Thank you, Steven Cohen.

The bullpen is…interesting. Edwin Diaz is the closer. Cross your fingers and reach for a beverage. Jeurys Familia will still be here in 2021. Again, reach for something. Drew Smith, maybe? Basically, again, the Mets are going to have to purchase some relief pitchers.

Building a competitive team, a consistently winning team, and, hopefully, a perennial playoff team is not easy. Will even Steve Cohen be too late for the Mets to win with deGrom? Will the Mets just never be good enough while we have this beautiful second-place finisher to Seaver? Will individual achievement be sufficient when we think of good ol’ 48?

He takes the ball every fifth day and we are happy.

But, he takes the ball for another post season? A Wildcard Game or Series? Another NLDS after beating both Clayton Kershaw and Zack Greinke in 2015? Another NLCS? A World Series game, so he can shake off the ghost of his Game 2 failure against the Kansas City Royals in 2015?

That would make us happy too.

7 comments on “How do the Mets win with Jacob deGrom?”