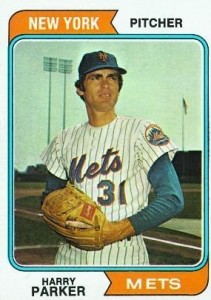 I once had a Little League coach who called me “Dave.”

He wasn’t being clever, or even ironic. He was just enough of a baseball fan that when he saw “D. Parker” on his lineup card, the natural association was “Dave.”

It must be told that I was not very Cobra-like, so the irony thing actually would have worked pretty well. I was a rail-thin spray-hitting first baseman and a hard-throwing but erratic LHP– I racked up many a 10 K/10 BB stat line back in the day.

But I didn’t mind being called “Dave.” Let’s face it– Dave Parker was badass.

No one ever called me “Harry,” though…

Harry Parker played a pretty significant role on the Mets ’73 pennant-winning team. He went 8-4 with a 3.35 ERA and saved 5 games as a reliever and spot starter.

Harry returned to the Mets in ’74, and saw the most work of his career, accumulating over 130 innings for that 71-91 squad. Unfortunately, he went 4-12 in the process, and was waived by the summer of ’75.

But coach– I wouldn’t have minded if you’d called me “Harry.”

Now, “Salty” on the other hand…