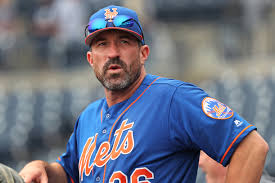 What has three catchers, 10 infielders, and a roster full of players in flux? The New York Mets. Depth is a nice problem to have but it comes with its own set of challenges for Mets’ second year skipper Mickey Callaway.

Last season, in his rookie year, Callaway had a bumpy ride getting used to being the dugout boss and adapting to the National League and a new franchise. The easy part of his job was playing the right guys as this was not a deep roster. This season, Callaway will have to work closely with a very hands-on General Manager and an expanded front office that includes statisticians, trainers, scouts, former players and every variety of baseball expert. Together, with Callaway as the face man, they’ll have to monitor the results and progress of at least 40 worthy players to determine who should play the most and who should play against lefties on the road in the rain at night.

There will be upstart rookies nipping at the heels of seasoned veterans. There will be slumps and injuries and hot streaks and comebacks.There might even be stretches when the team is relatively healthy and Callaway will be faced with benching proven players or even demoting or releasing them due to lack of playing opportunities. Brodie Van Waganen and his highly educated entourage will handle much of this, but it will fall on Callaway to read the players, massage the egos and have the tough conversations.

On the pitching side, things should be a little more straight forward. The Mets have a clearly established starting five with a pretty good idea of who’s next in line. The bullpen has a pretty clear pecking order from the closer to the high leverage setup men, situational guys, multi-inning middle relievers and a few lower leverage relievers who will shuttle between Syracuse and Queens all year.

On the offensive side, there’s a very different story. The roster crunch is under way with the team featuring more infielders, outfielders and catchers than there are jobs available. A few guys on the bubble will either get released or optioned to the minors over the next week. Complicating matters is that we’re likely to begin the season with at least three expected starting players on the injured list. Yoenis Cespedes, easily our best hitter and everyday player, is expected to miss at least the first half of the season, yet with all the off-season moves the front office made, accounting for this wasn’t really among them. More recent, though less serious injuries have thrown a monkey wrench into roster planning.

Third baseman Todd Frazier got bumped to first base thanks to the addition of second baseman Jed Lowrie who was signed to play third base because we traded for Robinson Cano but that pushes infielder Jeff McNeill to the outfield only Frazier and Lowrie are both injured so McNeill is back at third while two youngsters fight it out for first base and a guy who can play all four corners and pitch in a pinch might get lost in the shuffle .You follow? You have to think this is going to be a tricky situation to deal with for Mickey Callaway.

He’s also got three catchers (sorry, Tomas NIdo doesn’t count) to juggle and two center fielders who can’t hit on guaranteed contracts. Due to not just the team’s depth, but also the presence of multi-position players like Lowrie, McNeill and J.D. Davis, the roster will be fluid all year. If handled properly by the front office, Callaway will never again be faced with having to trot out hasbeens and AAAA players that don’t belong. That surely brings a smile to his face, but the season ahead will not be an easy one for the second year manager.