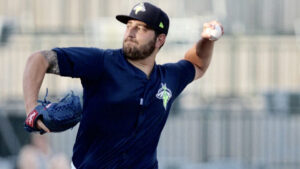 Through the tail end of 2016 Thomas Szapucki was the darling of Mets360.  Writers here were over the moon with his dominant numbers in Kingsport and Brooklyn and the scouts all agreed that his “stuff” had gotten significantly better.  2017 saw injury and despite working through a rehab regimen to avoid Tommy John surgery, we saw the lefty lose most of his 2017 and all of his 2018.

Now, it’s 2019 and Szapucki has rehabbed his way through 21.2 innings of Low A Columbia to make his debut in the Advanced A Florida State League.  Through those scant 8.1 innings he’s managed to give up only 8 hits with 3 walks and 10 strikeouts.  All solid numbers, but what do we make of 8.1 innings?

We will get to see him pitch a number of times before the season ends and we need to keep our eyes on how he does.  Below are some stats to pay attention to as his season progresses.

Now that he’s been stretched to 4.2 innings you should look for Szapucki to last 5.0 or more innings in each of his remaining outings.  You should start to get excited if you see him lasting 6.0 or more but be pleased to see him get through a typical modern era start.

Szapucki wasn’t known for control problems or giving up many hits.  You’ll want to see his WHIP crawl down below the 1.25 mark for the year in his new level.  If he can get it below 1.10, then you can start bandying about the “Ace” word again more freely.

An “Ace” caliber pitcher should average about a 9.0 (or better) K/9 throughout their minor league development.  Successful pitchers can do worse but “Aces” are usually known to get at least one strikeout per inning pitched.  He currently sits above this mark (10.84) but in 2016 his K/9 was an outstanding 14.88 between Kingsport and Brooklyn.

Should his innings, WHIP and K/9 reach his previously held expectations the Mets will be very eager to show him off come Spring Training, before sending him to Binghamton.  Let us all hope that injury bug doesn’t rear its ugly head once more.

Luis Guillorme should be on the 2020 bench – He’s been good all year in AAA and should allow the Mets to not go out and sign any additional aging veteran backups.

Luis Carpio continues impressive year – After falling off the radar in 2018 he’s earned his way back in with a strong season between Advanced A and AA leagues.

It’s past time for Andres Gimenez to show us something – With the Mets iffy on the future of Amed Rosario at shortstop it is crucial that Gimenez start to get things going.  Hitting .294 over his last 10 games is a help.

Hansel Moreno is a nice success story for 2019 – He’s definitely found his footing both in the outfield and in Port St. Lucie.

Wagner Lagrange gets an overdue promotion – He’s been the most consistent hitter for the Fireflies and at 23 he’s past due.

Shervyen Newton enjoys a short-lived surge – The prospect some scouts rank in the Mets Top 10 had a trio of games showing a glimpse of greatness but he’s hitting .225 with 14 strikeouts over the last 10 games he started.

Mark Vientos seems to be sustaining – He’s hitting .289 over his last 10 games with 3 home runs.  I would love to see more walks.

Ronny Mauricio continues fine season – He’s hitting .286 over his last 10 games and is hitting a .701 OPS on the year while being substantially younger than the average player in his league.

Simeon Woods Richardson back on track – His past two outings were both very good and it seems that he’ll be ready for Advanced A in 2020.

Jake Magnum (4th Round Pick) doing better – After taking a while to sign, Magnum is now hitting .306 over his past 10 games.

Francisco Alvarez continues to dominate – He’s only 17 and began the year in the GCL but Alvarez is proving to be more than a match for Kingsport pitchers as well.  The Mets have been limiting his outings in Kingsport though.

Gregory Guerrero is getting hot – The second base prospect has a 9 game hitting streak going and is hitting .389 over his last 10 games.

Brett Baty (1st Round Pick) still adjusting – He’s not taken his promotion with as much ease as Alvarez though he still shows some good sign.

Josh Wolf (2nd Round Pick) spotted – One inning of professional baseball beneath his belt.  One hit and two strikeouts as well.

Freddy Valdez stays strong – He’s not had a perfect time in DSL but he’s been more than good enough to progress to the states after this season.  Looks to have plenty of power to his swing.

Dyron Campos looks like a leadoff guy – A combination of good speed and patience is always a good start but he’s also got a tendency to be picked off.  There are tools here worth developing.

5 comments on “Mets Minors: What to expect of Thomas Szapucki”