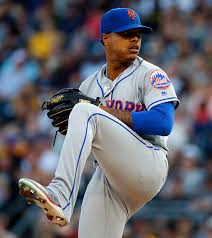 The Mets acquired Marcus Stroman near the trade deadline last year, partially as an upgrade to Jason Vargas and partially as a 2020 replacement for Zack Wheeler. The cost was two prospects, which by itself was okay but combined with giving up two prospects in an earlier deal, really caused the Mets to be thin at the upper levels of their farm system.

Vargas ended up being given away to the Phillies to make room for Stroman. In his 11 starts with the Phillies, Vargas was 1-4 with a 5.37 ERA and a 1.518 WHIP. Meanwhile, Stroman also made 11 starts with his new team and went 4-2 with a 3.77 ERA and a 1.475 WHIP. On the surface, he certainly appeared to be an upgrade from Vargas. But both players were better before the trades then afterwards. Would the Mets have been better with Vargas and the prospects? Right now it’s too soon to tell. A lot will depend on how Stroman does in 2020 and if he ends up with the Mets long term.

Meanwhile, Stroman had a very odd debut with the Mets last year. In his first seven starts, he really did not resemble the guy who dominated with the Blue Jays, as he had a 5.05 ERA, a .918 OPS allowed and opposing batters had a .387 BABIP. But in his final four games with the Mets, we saw a pitcher who was even better than the guy who made the All-Star team earlier in the year. In that closing stretch, a span of 24 IP, Stroman had a 1.88 ERA, a .540 OPS allowed and opposing hitters managed just a .258 BABIP.

We also have 138 IP where he’s been an SP5. How do you forecast a guy like that? Let’s start by checking with what the computer models have:

That’s a lot of agreement among our four models. You better have a solid reason to deviate from this, regardless of direction.

In 2018, Stroman battled a shoulder injury. The problem first surfaced in Spring Training and while he opened the year in the rotation, he was sidelined from May 9 to June 22. Before going on the then-called DL, Stroman had a 7.71 ERA. In his first 10 starts after he returned, Stroman had a 3.34 ERA and limited opposing batters to a .655 OPS with a .303 BABIP. But Stroman was lit up in his final two starts of the season, as he allowed 9 ER in 5.2 IP. Those last two outings, Stroman battled blister problems. Since it was September, no DL move was announced. He simply didn’t pitch after September 3.

So, the computer models are weighing 2018 heavily, since it happened so recently. Stroman did not have either shoulder or blister problems last year. Are they “cured” and in the past? You never like to hear about a pitcher with a should problem. And blisters can linger, too. The responsible thing would be to put up a prediction in line with the computer models. But a healthy Stroman is significantly better than that.

If we’re going to dice his 2019, and include his first seven starts with the Mets in the “bad” column, shouldn’t we dice 2018 and put his middle 10 starts in the “good” column? That seems appropriate. So now we have 409 IP over the past three years where Stroman’s been good and 78.2 IP where he’s been bad, with the majority of the bad innings occurring when he was nowhere near 100%.

Here’s my totally biased prediction for Stroman in 2020:

You’ll have more credibility in the future if you chime in now with what you think Stroman will do this year. Next, Amed Rosario goes under the forecast microscope.