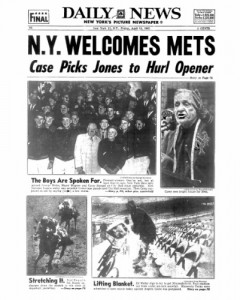 In 1958, the Los Angeles Dodgers and the San Francisco Giants made their debuts in California, leaving behind a gaping hole in the hearts and mind of baseball fans in New York City. This massive wound that was left in their perspective fanbases lead to a new baseball franchise coming into existence in 1962, the New York Metropolitans, very quickly shortened to Mets.

Prior to the Mets stepping oton the field for the first time in 1962 came the 1961 expansion draft and offseason. This particular draft later became notorious for the lack of quality players that were made available to the perspective clubs and for how the draft had been set up to line the pockets of the other National League owners while allowing the pre-existing teams to clear roster spaces. The draft was set up prior to the cut off date to protect players from the Rule 5 draft. This meant that the 40-man rosters from 1961 were still in tact and National League teams had not set about moving on from players that the teams had no intention of moving forward with in 1961. Basically, the Mets and Houston Colt 45’s were paying the other National League teams for players that those teams, for the most part, had no intention of holding on to.

It’s startling how well this worked out for the eight pre-existing National League teams. In total, the other National League franchises were given 1.55 million dollars for a group of players that many of them would have released anyway. The other eight clubs made 136 players available, 17 from each of their 40-man rosters and the two expansion franchises were required to select at least three players from each team, two in the regular part of the expansion draft and one in the premium part. Each club could also take an additional player from each team in the main part of the draft at a slightly lower expense. The New York and Houston franchises actually refused to draft a total of 11 more players because of how expensive the whole thing had become, preferring to spend that money on their minor league systems. In all, the two franchises selected 45 players, leaving 91 with their old teams. Of those 91, only 42 of them remained on their teams’ 40-man rosters beyond the Rule 5 cut off date in October. The Braves and Dodgers were the worst offenders in all of this. The Braves only retained one of the 17 players they made available, while the Dodgers retained three, one of which, Charlie Neal, they traded to the Mets before the season started. The whole mess was a total sham, a way for the other teams to make a lot of money (which 1.55 million dollars was in 1961) and help their rosters in the process.

Did all of this mean the Mets had to lose 120 games in 1962? Not at all. Houston lost 96 games, but also laid the groundwork for what it hoped would be a decent group of players that could be boosted by spending money on the farm system. The Mets did the opposite. Their team president, George Weiss, decided to acquire “name players” to help get people to the stadium. His hope was that would allow him time to build a farm system that would get the Mets to long term respectability. Because of that, he drafted players that were clearly over the hill in Gus Bell, Gil Hodges and Hobie Landrith, all because they were either known in New York or well known from other cities. He would also later purchased Richie Ashburn (who would play his last season in 1962), Gene Woodling (also in his final season in the major leagues), Johnny Antonelli (who wouldn’t make the team) and Clem Labine (who would pitch four extremely unsuccessful innings for the Mets in 1962) for the same reason. That also lead to trades for Charlie Neal and Frank Thomas, who had solid years, but were too old to be any part of the future.

What Weiss’ moves in the draft and prior to the start of the season lead to was one of the worst teams in baseball history and an organization that would overturn the roster repeatedly for the next 6 years, until finally developing some players in 1967 and 1968 that lead to the Miracle Mets of 1969.

Could this have been different? Absolutely. The Mets could have both brought in name players, drafted some raw prospects and some major league ready younger talent, that could have helped in 1962 and built a better bridge that might have made the team more competitive much sooner.

First off, Weiss did not draft a lot of pitching, which is surprising, drafted three catchers and two players who could only play first base. It was a roster that didn’t really fit together and had to cobble together arms later on. Could this have been different? Definitely. For instance, why the Mets didn’t draft Eddie Fisher (from the Giants) and Jim Brewer (from the Cubs), makes very little sense. Neither had much success in the major leagues to that point and Fisher was a knuckleballer, but both were in their mid-twenties, had major league experience and had been highly thought of prospects in their organizations. Instead of Fisher, the Mets drafted Ray Daviault, a 27 year old relief pitcher who had never pitched in the major leagues. The Mets could have still taken the two Cubs they selected, Ed Bouchee and Sammy Drake, then taken Brewer in the supplementary round. Instead they took Sherman Jones from the Reds in that round, a pitcher who had been on the World Series roster, but had been virtually a relief pitcher for two years and was older than Brewer (who had started in the minor leagues, with success, in 1961). This isn’t even mentioning Orlando Pena, who was made available by the Reds, was only a year older than Jones and had actually had success in the Major Leagues prior to 1961. Robin Roberts was also made available by the Phillies. He had an awful year in 1961, but he was the kind of name player that seemed to be the type Weiss was drawn to. Instead, the Mets took Choo Choo Coleman, a catcher who hit .128 in 1961 for the Phillies and journeyman outfielder Bobby Gene Smith. Imagine how much more successful the pitching staff would have been if those four players were selected and there wasn’t really a good reason not to do it.

Additionally, the Mets had opportunities to take risks on intriguing young players that might not have contributed in 1962, but would have potentially been something to build a farm system on. Ray Culp, Dick Allen, Dick Dietz and Vic Davalillo were all available in the draft and were not selected by either club. Allen and Dietz were in the low minors, but both players had absolutely annihilated the competition at that level and should have been worth the $100,000 total that the Mets would have had to shell out to get them. Culp had come off a bad minor league season, but he was a hard throwing young arm that needed to work on his control, as most young pitchers do. Davalillo had begun the transition from pitcher to outfielder due to his ability at the plate, his speed and the fact that his arm would be better used from centerfield instead of as a relief pitcher.

Of those four, only Davalillo would have probably seen time in the major leagues in 1962, and Dietz was the farthest one from making his major league debut, but all would have made impacts and appeared well in advance of 1968, when the Mets first became competitive. Their presence might have made the team not only more competitive, but more willing to spend energy on creating a stable major league roster with less of the yearly turnover that became the Mets trademark.

Yes, it’s easy to do this in retrospect, but really take a close look at the expansion draft of the 1962, the players available and whatever data you can look up. It’s hard to argue that these players shouldn’t have been in the Mets organization in 1962 and beyond when you look at what Weiss chose to do instead.

One comment on “The 1962 Mets: What George Weiss should have done”