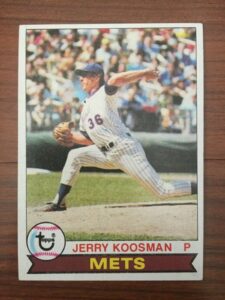 In 1976, Jerry Koosman won 21 games and finished second in the NL CY Award balloting. The next two years weren’t quite so good. He went a combined 11-35 those two years, including a 20-loss season in 1977, making him one of just seven pitchers since 1960 to win 20 games one season only to turn around and lose 20 the next. Here are the other hurlers since Koosman to turn the trick:

Koosman was essentially a league-average pitcher his last two seasons with the Mets, despite the won-loss record. The Mets traded him in the offseason before 1979, making this card a reminder he wasn’t on the team. Seeing this card didn’t bring anger, like the 1977 Mickey Lolich or the 1980 Richie Hebner did. Instead, it was just a reminder of what was once and what certainly wasn’t happening currently with the Mets.

But removed from the emotion of the time, the thing that stands out about this card is the action shot, specifically the near-Tom Seaver knee to the ground. My mind has the visual of Seaver getting his knee dirty, Koosman with his straight-out leg kick and Jon Matlack with his rocking-chair windup.

The 1979 set was a disappointment to me at the time. The design was a little too similar to the 1976 one. But it was also a case where I had passed the peak of my collecting, even if it was still a part of my life at the time. And it’s likely the sad state of the Mets played a factor. But seeing this card now makes me happy.