It took only seven innings into the 2012 season for the Mets to suffer the injury bug, as centerfielder Andres Torres strained his calf-the same calf that bothered him all spring-in the seventh inning of Thursday’s opener vs. the Braves. As a result, Torres is now headed to the 15-day DL.

Torres has long been victimized by injuries, so I guess this was his initiation to the Mets, who themselves (as well know) have been snake bit by injuries. 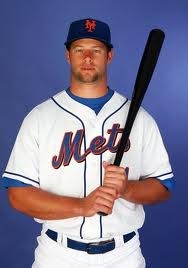 Now the Mets will call on Kirk Nieuwenhuis, who perhaps not so coincidentally has his own issues with staying healthy (recently battling an oblique injury this spring), to take over Torres role as the team’s center fielder. Is “Captain Kirk” ready for the spotlight?

First off, Nieuwenhuis is no savior or that highly touted of a prospect. What he is though is the Mets most logical choice to take over center field. Nieuwenhuis has the athleticism and strength to make up for the loss of Torres.

Nieuwenhuis, who was taken in the third round of the 2008 draft, is a former running back in high school and a player Mets’ fans have been clamoring for a while. You know that Nieuwenhuis is going to give a full-out effort. Admittedly, I don’t know a whole lot about him, but he certainly sounds like he has the intangibles to make an impact and an impression amongst fans. You know, in the same way Mookie Wilson and Lenny Dykstra did in the mid-80’s. Nieuwenhuis is a jack-of-all-trades type player; one who is solid in most aspects of the game, but not great.

While not blessed with great power, Nieuwenhuis is said to have good gap power and uses all parts of the field. Most scouts claim him as a player with average to just above average speed but  one who knows how to run the bases well.

To ease him into the lineup, Terry Collins will likely bat Nieuwenhuis seventh or eighth, which could be conducive for him to succeed right off the bat.

Nieuwenhuis, though, definitely needs to get routine playing time as to not stunt his growth as a player. Collins has said he may platoon Nieuwenhuis, a lefty, with veteran Scott Hairston. That could be a bad idea since we should all see what Nieuwenhuis can do up here.

The Mets should give Torres all the time in the world to recover this time while giving Nieuwenhuis an extended look. Considering many project him as the center fielder of the future, Nieuwenhuis needs as many at-bat as possible.

So, while you should expect some growing pains from Nieuwenhuis, he should at least pump some enthusiasm into the fanbase. Nieuwenhuis will be your prototypical bulldog who will hustle and scrap his way into Mets’ fans hearts. Think of him as a better, vastly more-productive and seasoned Chris Carter. A good comparison could be Aaron Rowand.

2 comments on “What should we expect out of Kirk Nieuwenhuis?”