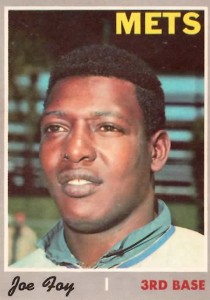 Editor’s Note: The following article was written in English, and then translated into French using Babel Fish. The resulting French was then translated back into English using the same program. The Editor is still trying to figure out why. C’est la vie…

It was right 26, and to come to far one season where he’d led in 71 races career-high, while stealing 37 bases.

Amos Otis were a thin child who had gone up half strong season with water of tide, but were nonfounded in the bigs. Thus the package d’ Otis and of Bob Johnson for Foy was not also absurd on December 3, 1969.

Naturally, Foy fell a cliff, and Otis transformed into multiannual all star with Royals, thus the trade looked at rather bad in the retrospective sight. Foy is represented here on its 1970 Off wee-Chee chart.

Off wee-Chee were the Canadian counterparts of Signals, and beginning in 1965, they produced the units which harshly reflected the design of that year’s placed of Signals. 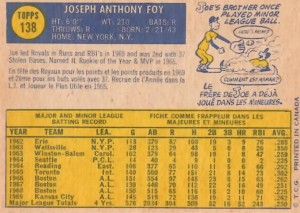 Often, the size together was truncated– for example, the 1970 Off wee-Chee entered to 546 charts, whereas same the year’s together of Signals inclined the balances with 720.

Where Off wee-Chee the units become really interesting is on the backs of chart. For example, the 1970 backs are printed on actions grayer than the version of Signals, and all the principal text is bilingual. L’ pier with open-type screen, even the cartoons are bilingual, making them the French cartoons freshest since Asterix.

Thus in a word, the 1970 Off wee-Chee together is a manner of beauty to go…