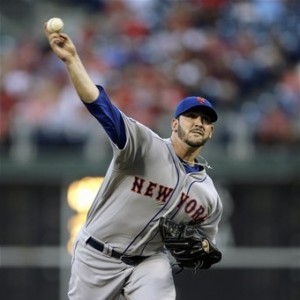 Wouldn’t you know it? The Mets are on a four-game winning streak!

It’s hardly cause for celebration, but winning four games in a row (and in the process two series in a row) is at least a little soothing after all the suffering Mets’ fans have had to endure in the past month or so.

Also helping matters is the way Matt Harvey is holding up his end of the bargain. Ever since he got called up on July 26, Harvey has given the Mets a shot in the arm, which was exactly what they needed. For a staff sans Johan Santana and Dillon Gee, Harvey is bringing stability to the rotation while also restoring faith in a seemingly hopeless fanbase.

Harvey has now made seven starts and has thrown five quality outings in the process. His other two starts were perhaps his best and his worst. Harvey was splendid in his debut in Arizona when he pitched 5.1 shutout innings, allowing only three hits and three walks while striking out 11 batters (a Mets’ team record for a rookie pitcher making his debut). Harvey’s start almost a week later in San Diego was his worst, when he only pitched five innings and allowed five earned runs on eight hits.

Outside of that minor hiccup against the Padres, Harvey has been everything he was pegged to be and then some.

After Harvey shut down the Phillies on Wednesday night, throwing 6.1 innings and giving up just two runs on six hits and two walks, Harvey upped his record to 2-3 while reducing his ERA to 2.76. While Harvey is still a bit wild at times, he still boasts 49 strikeouts to 15 walks. That works out to a solid 3.2 K to walk ratio. That’s nothing to sneeze at.

Of course, there will be some bumps along the way as Harvey is far from a finished product, but given the circumstances he was pushed into it is great to see Harvey thriving while the team around him struggles.

With Harvey being such an integral part of the future, he will be handled with kid gloves the rest of the way. With Harvey’s total innings between Buffalo and New York approaching the 160 inning threshold, the Mets (like a certain team in the nation’s capital is doing with a certain pitcher) are planning to shut him down in order to preserve his arm.

I can’t say I disagree with the plan, considering the Mets really have nothing to play for. There is a lot riding on the right, power arm of Harvey. Making sure Harvey is cocked and loaded for a full load next year should be the ultimate goal. Hopefully the Mets will have better parts around Harvey next year so that he can make August and September games meaningful once again.

So, enjoy Harvey and his power arm while you can, cause it’s about to be shut down in a couple of starts. For a season that has left the fans disappointed more times than not, at least Harvey is delivering on his promise.