This all led to some side research on the original 1962 team. While doing that, it suddenly occurred to me how many of those names were unfamiliar. So, in no particular order, here are five original Met Pitchers nobody (well almost nobody) has ever heard of: 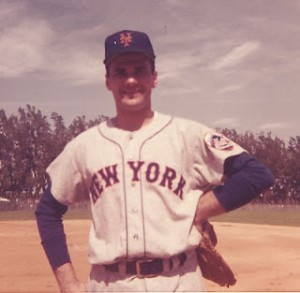 Ray Daviault: Daviault was a RHP. His teammates called him “Frenchy”. In 36 games for the Mets, he threw 81 innings, gave up 14 HRs, struck out 51 and walked 48 batters. His ERA with the Mets was 6.22 and he went 1-5. He got his win in relief of Al Jackson against the St. Louis Cardinals on July 7th at the Polo Grounds. In addition to getting his lone victory against the Cardinals, three of his five losses came against them as well. He was chosen by the Mets with the 18th pick in the 1961 expansion draft off the roster of the San Francisco Giants.

Larry Foss: Foss was also a RHP. The Mets purchased Foss from the Pittsburgh Pirates on September 6, 1962. He appeared in five games. He threw just over 11 innings. He struck out three batters and walked seven. In the only game he started for the Mets, he allowed six runs on ten hits in five innings. He took the loss against the Houston Colt 45s on September 18th. Overall, he went 0-1 for the team. He finished with a 4.63 ERA.

Herb Moford: Moford was another RHP. He was purchased on December 2, 1961 from the Baltimore Orioles. He appeared in seven games and threw 15 innings. He struck out five and walked one batter. He went 0-1 and ended the season with a 7.20 ERA. In his only decision, he took the 5-2 loss against the Colt 45s on April 17th in relief of Jay Hook. Casey Stengel saw him pitch for Rochester Red Wings minor league club in 1961 and gave him a chance with the Mets.

Dave Hillman: Hillman was yet another RHP. He was purchased on April 26, 1962 from the Boston Red Sox. He appeared in 13 games. He went 0-0. He struck out eight batters and also walked eight batters. He threw 15.2 innings and ended with a 6.32 ERA. He was a member of the Chicago Cubs’ staff for five years in the fifties before pitching for the Red Sox and Reds organizations.

Sherman Jones: Sherman was yet still another RHP but unlike the other players on this list, he batted left-handed. He started the first Met home game ever at the Polo Grounds; he gave up two runs in five innings and took the loss. He also got the first Met hit at home with a single in the third off of Tom Sturdivant. He would have started the first Met game ever played (instead of Roger Craig) but the tip of a lit matchstick landed in his eye and knocked him out of commission for a few games. His nickname was “Roadblock”. He threw 23.1 innings for the original Mets. He struck out 11 and walked eight. His record was 0-4. He finished the ‘62 season with a 7.71 ERA. He was chosen by the Mets with the 34th pick in the 1961 expansion draft off the roster of the Cincinnati Red.

After 1962, none of these players ever pitched again at the major league level; not for the Mets; not for anybody.

…and as for Red Kress: He was only 57 when he passed away from a heart attack. Casey Stengel, said he was the “hardest working coach” that he ever saw. The original plan was to have him coach for the team’s minor league affiliate Syracuse club but Stengel was so impressed with his skills that he decided Kress deserved a chance to coach at the major league level. After his death, Stengel went on to say that “he was a great inspiration…everybody in baseball will miss him.”

So, if like me, you never heard of these Mets, then here is a chance to familiarize yourselves with them. And, if unlike me, you do remember these original Mets, so much the better. They most certainly deserve a short acknowledgment for all their contributions.