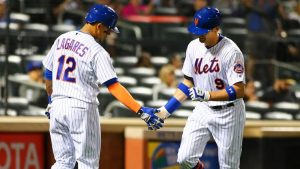 Much has been made of the Mets’ starting pitching depth, and with good reason, with some eight pitchers who have had at least some success starting in MLB. Catching depth is also a strength, with Travis d’Arnaud and Kevin Plawecki having good Springs. The depth of the outfield may not have gotten quite as much attention, but it is shaping up to be very good as well.

Jay Bruce figures to be the starting right fielder. He may not have as much range as most outfielders, but he is sure-handed and has that live arm that has racked up double digit outfield assist totals in the past. But it is the bat that sets him apart, he is usually good for around 30 homers and close to or more than 100 RBI. For what it is worth, he’s had a solid ST with a line of .323/.324/.516 as of this writing.

Once he returns from rehabbing his injured shoulder, Michael Conforto figures to be the every day center fielder. He showed last year he can handle the fielding part adequately, although he is more of a natural right fielder. And after a poor 2016, he really broke out with the bat in 2017, putting up a slash line of .279/,384/.555 accompanied by 27 homers in an abbreviated season due to that injury.

Left field will be manned by Yoenis Cespedes, one of the most dangerous hitters in the game, capable of producing tape-measure shots. He’s been pounding the ball this spring with a SLG of .652. He may not be quite as good a fielder as he was earlier in his career, but as recently as 2015 he did win a Gold Glove. Note that all three of these outfielders are power hitters, and it seems like a good part of the time they will form the heart of the lineup.

The fourth outfielder generally gets a fair amount of playing time, and the person filling that role for the Mets will be Brandon Nimmo. He can field all three outfield positions, including center. He showed promise as a high OBP hitter in 2017, but this spring he has added a power dimension, with an ST line of .283/.358/.630 with three homers. Sure it’s only March, but those numbers are encouraging, especially the SLG.

The Mets have a pretty good fifth outfielder in Juan Lagares. His defense is spectacular, he earned a Gold Glove in 2014. His bat, and some injuries, have held him back since that season. In the off season, he retooled his swing and added some muscle. The results in ST are underwhelming, but sometimes it takes awhile to break in a new swing. Think Daniel Murphy in 2015, he had redone his swing but the results did not really kick in until the latter part of the season, and especially the postseason. Perhaps Lagares’ bat will follow a similar trajectory.

The Mets probably won’t have the best outfield in MLB this season, but they might just have the deepest outfield.

14 comments on “The Mets’ outfield depth is looking good”