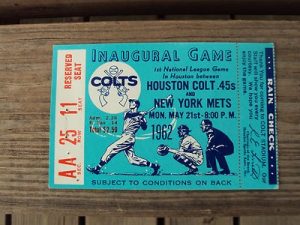 The Las Vegas Golden Knights of the NHL have advanced to the final round of the Stanley Cup hockey competition, remarkably in their very first year of play. One reason for their success was the makeup of the hockey expansion draft, which allowed the franchise to grab some good young and some good established players off the rosters of the other teams.

Once upon a time, the New York Mets (and Houston Colt .45s) were admitted into the National League, and they too stocked their rosters from the other teams. However the moguls of the National League made quite sure the pickings were going to be mighty slim for the new teams.

MLB was kind of forced into expansion, the owners were quite happy with the eight team league setups they had. However, in 1959 Hall of Fame executive Branch Rickey began organizing a rival league, the Continental League, to challenge the established teams. This potential problem spurred MLB to expansion, picking off some of the stronger owner groups from the Continental League and basically killing the new league before it even started.

The AL held its’ expansion draft after the 1960 season, and the NL one year later. The NL owners chose a different draft format than the AL, one that protected their talent more efficiently.

The NL expansion draft was held on October 10, 1961, right after the World Series. Teams could protect seven players from the 25 man roster, and, counting those, a total of 15 players from the 40 man roster. That does not sound too unreasonable, at first glance. However, the date chosen for the draft, October 10, was very important in keeping the best prospects with their original teams.

October 10 was after the season, but before the rule five draft where players not on the 40 man roster could be claimed by other teams in the league. Thus all the other NL teams kept some top prospects off the 40 man roster on the expansion draft day, then a week later, put them on, thus making them ineligible to be drafted in the expansion draft as well as the rule 5 draft. As a result, young players like Gaylord Perry, Manny Mota, Bob Veale, Denis Menke, Cookie Rojas and many more were protected from both drafts, and saved for their original teams.

What was available to the expansion clubs was mostly over the hill players or marginal AAA or AAAA type players. The Mets’ first pick was 32 year old catcher Hobie Landrith, who only played 21 games for the team. The Mets did pick quite a few players with Brooklyn Dodger pedigrees, among them Gil Hodges, Roger Craig and Don Zimmer, all very much past their prime. Ironically there was one ex-Dodger, Bob Aspromonte, who ended up being a productive fixture for years at third base…for Houston. He was on the board when the Mets picked, but they took Landrith and Houston gobbled up Aspromonte next.

Neither team was happy with the personnel available, Savvy Houston GM Paul Richards was quoted as saying “I figured the lists would be bad, but they’re worse than I thought they would be.”

The prices the expansion teams had to pay weren’t cheap either, players cost their new teams either $75,000 for regular draft, then there were some at $50,000 and finally there were some mandatory “premium picks” that cost $125,000 each (oft-injured Don Zimmer was one premium pick for the Mets.) This was long before big TV contracts and when the dollar was worth way more than it is now, so these players definitely were overpriced for the time. The expansion teams had to pony up a hefty franchise fee as well.

The result, as we know, meant both teams suffered years at the bottom of the league. Every year from 1962-1965 Houston finished ninth and the Mets were tenth. Finally for 1966 they moved up to eighth and ninth respectively, with the under performing Chicago Cubs tumbling to last.

There was only one player from the original draft on the 1969 Mets championship team, and that was Al Jackson. Jackson had been one of the better Met pitchers for a few years, but he was released in 1969 early in the season after pitching just 11 innings.

The Las Vegas hockey team should be lauded for its first year success. Such success was not possible for the Mets and Colt .45s in 1962, due to the draft scheme devised by the owners.

4 comments on “Rival owners stacked the deck against the expansion Mets and Colt .45s”