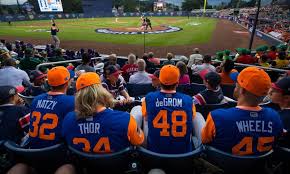 In the five games before the All-Star break the Mets used the following starters: Wheeler, Vargas, deGrom, Syndergaard and Wheeler. After a four-day break, the Mets came out and used Vargas, Syndergaard and deGrom for the three-game set in Miami. You can kind of see why they laid the rotation out that way – Vargas had gone the longest of the four without a start and they leapfrogged Syndergaard over deGrom because the former had thrown in the All-Star game. But Vargas got lit up and deGrom struggled and was pulled after five innings.

The graybeards among us will recall a time when managers were not slaves to trying to keep pitchers on a strict five-day rotation. Perhaps the most famous example was Whitey Ford, who manager Casey Stengel used year-in, year-out to match up against the top two teams in the league besides the Yankees whenever he could. The Mets could have – and should have – channeled Stengel with their post-break rotation.

My preference would have been to use Steven Matz and Zack Wheeler in the opening series. Matz had moved to the bullpen before the break and was the pitcher who had gone the longest since his last start. Also, in six games in Marlins Park, Matz has a 1.38 ERA. Wheeler ended up going on the IL on Monday, so he probably was not an option for the series. But that’s something the general public did not know coming out of the break.

Therefore, my rotation in the Marlins’ series would have been Noah Syndergaard, Matz and Jacob deGrom. There are two benefits from lining up the starters this way. First, you get Matz and his great record in Marlins Park a start in Miami. Second, you split up Syndergaard and deGrom and take away the excuse not to use Tomas Nido with deGrom on the hill. Nido caught Syndergaard on Saturday but was not in the lineup Sunday when deGrom pitched, as it was a day game after a night game.

We all wish that all of the pitchers enjoyed great success with whatever catcher was behind the plate. But we know it doesn’t work out that way. This year, deGrom has had nine games with both Nido and Ramos behind the plate. When Nido starts, his ERA is 1.83 and when Ramos is the starter, he has a 3.98 mark.

It should be pointed out that deGrom had several games early in the year where the start was delayed by weather and he did not pitch well in those games. And those were with Ramos as his catcher. It’s possible that deGrom’s numbers with Ramos are being weighed down by those outings.

Still, deGrom has asked for Nido to be his catcher and given how the team seems to be run with making him happy – it’s surprising that Nido hasn’t caught him more. Yes, Nido was in the minors for a part of the year but Ramos has caught him the last two games now.

It’s certainly among the possibilities that if the Mets had laid out their starters with what was advocated above, they still would have ended up with two wins and a loss. But they also might have won three games this way and not have had to use the bullpen as much as they did in the deGrom outing. It’s a potential small advantage that they threw away.

Stengel didn’t throw away small advantages. It’s one of the reasons why he won so many World Series with a lineup that featured three Hall of Famers – Berra, Ford, Mantle – while they Cubs with four Hall of Famers of their own – Banks, Jenkins, Santo, Williams – never even made it to the Fall Classic.

5 comments on “Examining the Mets’ post AS break rotation”