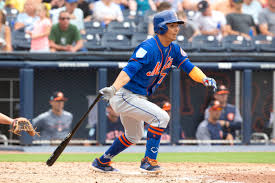 About a month ago the Mets360 podcast host asked me for a “Crazy Prediction.” My “Crazy Prediction” was that Andres Gimenez would fall out of the Top 5 Met prospects by the start of the 2020 season. This was, in part, because of my frustrations with Gimenez’s performance but also because the Mets success at the lower minors with some very high ceiling candidates.

How The Mighty Have Fallen

Why am I so down on Gimenez? He had only managed a .673 OPS, last year, in AA when the world was still so high on him. He’s even shown more isolated power in 2019 than he did in 2018. What is wrong with a Plus defensive shortstop sporting a .244/.305/.367 batting line? Well, for starters, nothing. The problem is having your team’s “Top Prospect” take major steps back in the two most vital areas of his offensive game.

For Gimenez to achieve that “Top Prospect” value in the majors he does not need to be the next Jose Reyes or Derek Jeter. He doesn’t need to sniff 20 home runs in a season or hit .350 like Jeff McNeil. What the Mets need and want from him is a player who can get on base and do some damage on the basepaths. The problem is, he’s proving to not be great at taking the walk and his stolen base success rate, and frequency, has taken a major dip.

In 2018 he stole 38 bases and was caught a total of 14 times between St. Lucie and Binghamton. The numbers across 122 games aren’t earth shatteringly good but on the present roster he’d be the best base stealer, instantly. In 2019 he’s played 77 games and stolen 17 with 10 caught stealings rung up against him. He has lost almost 10% off of his 2018 stolen base numbers and has seen a marked (albeit small) increase in his times being caught.

Does Andres Gimenez still feel like a Top 5 prospect to you?

Ronny Mauricio, SS (A) – The eighteen year old shortstop is in the midst of a successful season at Low A Columbia seeing only a small dip in his promising GCL power numbers. The SAL is known as a “Pitchers League” and you expect hitters to struggle, particularly when they are typically 3 years younger than their average competition. He still doesn’t walk much and his speed is only so-so but he looks like his switch hitting bat will earn him a place in the majors someday and that he will be an impact player when he gets there. It’s worth noting that over the last 10 games he’s hit .342 and walked 4 times. It would be good to see him finish the year with an OPS above .750 but he’s likely the number one prospect on my list either way.

Mark Vientos, 3B (A) – Older than Mauricio by a year, Vientos is a tall and powerful third baseman with big power potential. At 6’4” and only 185 pounds there is quite a lot of muscle that Vientos can still add to his frame. The power has translated, as Vientos skipped Brooklyn for Columbia but his On Base Percentage has suffered. Considering his playing in the SAL it’s quite impressive to see a .411 SLG but his walk rate needs to recover. There is plenty of time for that to happen as he and Mauricio begin their 2020 seasons in Port St. Lucie. He seems to be coming off of his recent hot streak presently which could see him fall below this next player in the rankings.

Francisco Alvarez, C (R+) – At the age of 17 most international players are still playing their innings with the DSL but Alvarez has already clubbed his way through the GCL (.462/.548/.846) and is raking his way into the limelight of the APP (.327/.421/.469). The 5’11” catcher has quickly proven that his power scouting was on the money. Based upon his performance it would be easy to see the Mets giving him a shot in Columbia next year (skipping Brooklyn) which would put him on a ridiculous MLB pace for a catching prospect. Over his past 10 games he has hit .429 with the power that has become typical of his production. It is possible for him to overtake Vientos in the rankings but he’s likely a lock for the Top 3 regardless of how the year ends.

In my mind all three (3) of these players have already got a good chance of sliding up ahead of Gimenez in the rankings, unless the shortstop starts hitting. Let’s move on to those who haven’t yet, but might.

Surging Towards the Top 5

Thomas Szapucki, LHP (A+) – We featured Szapucki last week and he followed that up with a 5.0 IP and 9 strikeouts and a 4.0 IP outing with only 2 hits a 6 strikeouts. If you are looking for someone who has the best chance of surging ahead of Gimenez (who hasn’t yet) it’s him. Szapucki shows every sign of making up for lost time and could, with a few more solid starts move from this list into the list above. Last week we talked about him lowering his WHIP and raising his K/9 to climb back into the elite prospect rankings and over his last two games his WHIP comes out as 1.00 and his K/9 has been a crisp 15.0 which is dang impressive.

Brett Baty, 3B (R+) – The first round pick for the Mets in 2019, Baty is assured a spot in the Top 10 but isn’t a lock to break the Top 5. In his favor is that he already earned a mid-season promotion from the GCL to the APP but unlike Alvarez he’s looked less impressive since that promotion. Should he bounce back and finish the APP with an OPS above .700 he could be the player to push Gimenez out of the Top 5. Last night he was the team’s DH and managed a 2 for 3 night with a double and a homerun.

Simeon Woods Richardson, RHP (A) – (Traded) This deal has not cleared yet and it appears that Marcus Stroman may soon be a Met. All that said, I’m not sure it’s a bad deal for the Mets with Woods Richardson being 2-4 years from major league service. If one looks at his last three outings and ignores the month of May they should be plenty excited about Woods Richardson. The pitcher, who stumbled badly for a month (10.89 ERA) but looked good in April (1.23), June (2.38) and so far in July (1.77). The 97 strikeouts in 78.1 innings also helps his case. It’s all a matter of making the memories of May disappear. If he ends the year with his ERA below 4.00, he’s a legit contender for the Top 5.

Josh Wolf/Matthew Allan, RHP (R) – It’s a lot to put a players scouting at the forefront of their value and it would take an unusual number of rookie innings pitched to earn either Wolf or Allan into the Top 5. Both have “Ace Caliber” potential but that is entirely tied to their ceilings. Both will likely feature in or around the Top 10 but they could earn Top 5 with gaudy GCL stats. Both have tossed 1.0 innings, with 1 hit, 0 walks and 2 strikeouts. There isn’t much apparent yet but it isn’t a bad sign.

Now, I’m not saying that I want Gimenez to drop out of the Top 5 or that it is “likely” to happen but I have to say that my “Crazy” prediction is looking less and less crazy by the day.

Anthony Kay appears to be traded – He is officially now on the Buffalo Bisons but before anyone bemoans this deal, please remember that he only had 26 strikeouts in 31.1 innings pitched and a 1.63 WHIP in AAA since his promotion.

Quinn Brodey figuring AA out – The outfielder is likely nothing more than a future 4th or 5th option but his bat is finding a groove in AA. He’s hitting .300 over his last 10 games.

Don’t sleep on Harol Gonzalez – He’s not an “Ace” but he’s looking like he could be a quality innings eater. The 1.10 WHIP and .232 Opp Avg should both give you reason to expect an MLB future.

Tommy Wilson has a heck of an outing – He pitches 7 innings, gives up only 4 hits, and 1 earned run while striking out nine.

Wilmer Reyes having a nice offensive season – An OPS of .875 is a great little trait to have for a middle infielder.

Brandon Fryman looks like he has value – He’s a shortstop who can get on base and seems to have some speed.

Jaylen Palmer is making the most of competition – He’s splitting time at third with Baty and at shortstop as well. He’s showing the ability to hit and showing power enough to be a relevant prospect in 2020.

Andres Regnault should get more notice – It’s hard being the second catcher on a team with Francisco Alvarez. If you look at Regnault’s stats there is plenty to like.

9 comments on “Mets Minors: Andres Gimenez and the top five prospects of 2020”