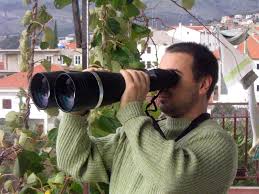 Prior to the 2019 season, MLB updated its rules to crack down on sign stealing. Sports Illustrated’s Tom Verducci wrote, “About six teams last year were commonly understood to have installed in-house cameras in centerfield that were trained on opposing catchers’ signs, according to one general manager. Several other teams were under heavy suspicion.” Verducci went on to explain that MLB updated a rule that was already on the books with a five-page document and required GMs and managers to sign a memo stating that their club is in compliance with these rules. Teams found out to violate these rules face the loss of draft picks and international spending money.

Commissioner Rob Manfred instituted these rules as part of his pace of play initiatives. He felt that the fear of spying by opposing teams was forcing more sign changing during the game, which helped to slow down the action.

Manfred already has a high-profile case on his watch where he imposed a stiff penalty on a team for using technology to cheat. The Cardinals back in 2017 were fined for hacking the Astros’ proprietary information. Former Scouting Director Chris Correa accessed their information 48 times over a 2 ½ year period, leading to the penalties. The Cardinals received a $2 million fine and lost their top two draft picks, with both of those penalties being awarded directly to the Astros. Furthermore, Correa received a lifetime ban from the game. Of course, Correa had bigger problems to deal with as he also received a federal jail sentence of nearly four years for his hacking activities.

Currently we have credible allegations that the Astros are now the perpetrators, rather than the victims, of an advanced cheating scheme using technology. During the 2017 season, one which would end with the Astros winning the World Series, Houston allegedly stole signs using a center field camera and then relayed information in real time to hitters. Former White Sox pitcher Danny Farquhar has gone on record as saying that the Astros made loud banging noises that year whenever the opposing team was going to throw an off-speed pitch.

Two current managers have been implicated in this sign-stealing case as being instrumental in the surveillance. Those are Red Sox manager Alex Cora, who was then the bench coach for the Astros, and newly-hired Mets manager Carlos Beltran, who was an active player for Houston at the time. For what it’s worth, Beltran denies using the live feed of the center field camera in his efforts to study pitchers.

It’s one thing to be sitting in the dugout and notice that anytime that a baserunner wiggles his fingers he’s stealing or to note that anytime a pitcher gets ahead 0-1 he’s throwing a curve on the outside corner. But it’s another matter entirely to use video to get access to something you normally can’t see. It’s against the written rules of the game.

Some might argue that since the Astros’ cheating happened in 2017 that it shouldn’t be subject to penalty, since the current rules can’t be applied retroactively. But the five-page update in 2019 was to clarify a rule that was already in place. And if that’s not enough, those of us old enough to remember when Bowie Kuhn was the commissioner will recall the phrase “best interests of baseball.” The MLB Constitution gives broad powers to the commissioner to levy punishments when an individual or team engages in activities that run counter to that phrase.

In short, it’s hard to imagine the Astros not suffering penalties due to their illegal use of technology.

Meanwhile, the Mets have just hired a guy alleged to have played a big part in this and Brodie Van Wagenen is doing his best ostrich imitation. He’s quoted as saying, “At this point, I don’t see any reason why this is a Mets situation.”

At best, this is a tone-deaf reply. If the Mets had just signed a free agent and after the fact found out that he beat his spouse while playing for his former team, the reaction from the GM would be completely different. Sure, you can say that the proper response is nothing more than PR or spin. But to act as if what happened in the past for a different team has no relevance at all, well that’s not a good look.

If MLB had not issued Correa a lifetime ban and the Mets hired him when he got out of prison, would the proper response be – I don’t see any reason why this is a Mets situation? Of course not. We would all be concerned about the cheating happening again. And don’t you believe that the Astros stole signs more often than the 48 times Correa hacked proprietary information?

Is it any different than if the Mets commit $100 million to a guy who was just suspended for violating the league’s substance abuse policy? Oh, wait, that’s a bad example because our GM actually did that. 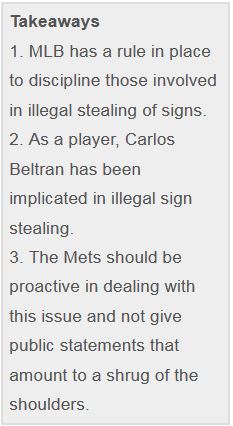 We know that experience matters and Beltran didn’t have any previous managerial experience on his resume. We know that credibility matters and we’ve come to find out that Beltran has some questions about this hanging over his head now. But Beltran was hired in part due to his willingness to work collaboratively with the front office. What happens if the front office asks him to do something unethical?

Beltran was a favorite of mine when he was on the Mets. This is in no way, shape or form an anti-Beltran screed. Rather, it’s just a desire for all things to be considered and all things weighted properly within that consideration. Perhaps Van Wagenen’s remark about Beltran’s role in the sign-stealing episode was an off-the-cuff reply and one he’d like to have back. Maybe he should get the benefit of the doubt on this particular issue.

But for me, if Beltran was a leading participant in the sign-stealing case – that’s something that is significant and needs to be addressed, both publicly and privately. His potential role in 2017 is not a fireable offense right now. But it needs to be stated in no uncertain terms that this is not acceptable behavior moving forward.