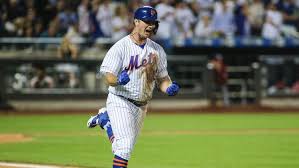 Today we kick off our eighth year of doing individual projections for the top players on the Mets. Like last season, these will be my own forecasts, not a group forecast like was done the first six years of the series. My hope is that everyone will weigh in on what they think the player will do in 2020. You’ll have more credibility later on about how you “knew” that Player X was going to have a breakout year if you say it before the game have started playing. Also, last year during the review part of our projections, a hat tip was given to the poster in the comments section who gave the best forecast. That will be the case again this year.

Just to state the obvious, these forecasts are pure projection and opinion on my part. There is no vigorous and non-biased systematic approach here. But you can get those computer projections from numerous systems out there. Speaking of the computer forecasts, ZiPS has already been released for the Mets, meaning we’ll have them from the start of the project. We’ll include numbers for any forecast system linked on the player’s B-R or FG page at the time our forecast is published.

To honor his amazing 53-homer season, we’ll start with Pete Alonso. Recall that it was far from a sure thing this time last year that Alonso would open the season with the big club. Many speculated that he would spend at least the first three weeks of the season in the minors so that the Mets would maintain an extra year of control. A few – not many – even speculated he would be kept down longer to avoid Super Two status.

But one thing that Brodie Van Wagenen made clear was that Alonso was going to be given a shot to win the job in Spring Training. And Alonso responded by posting a .352/.387/.620 line, with 4 HR in 75 PA. We’d like to think that he would have earned the job with those numbers. But it certainly didn’t hurt that two infielders – Todd Frazier and Jed Lowrie – opened the year on the IL, making it easy to bring the rookie north with the club for Opening Day.

Alonso hit right out of the gate, posting a 1.024 OPS the first month of the season. And outside of a brief lull right after the All-Star break, he pretty much hit all year long. One of the big questions about Alonso was if he could play first base at an acceptable level. And he ended up being much better than the scouting reports led us to believe. Alonso actually looked quite good scooping balls out of the dirt. Perhaps the biggest complaint with his defensive play was an over-eagerness to go after seemingly any ball hit on the right side of the infield. But there were improvement with that as the year went along and it’s possible even that won’t be an issue in 2020.

Defense certainly had the potential to limit the number of games Alonso played last season. But it’s unthinkable now after the offensive season he put up in 2019. He could be the equivalent of late-career Ryan Howard-level bad and he’d still be in the lineup every day.

So, how will Alonso fare offensively in 2020?

Looking at this Similar Batter through age 24 over at B-R, there are some interesting names, if not necessarily anyone who screams great comp. It’s certainly nice to see guys like Fred McGriff and Paul Goldschmidt and Albert Belle on his comp list. But it’s a little troubling to see old pal Ike Davis show up at the bottom of the list.

Instead, let’s look at the five top rookie HR players since integration before Alonso and see how they did in their rookie and sophomore seasons:

First, that’s pretty awesome company for Alonso to be in. But as expected, all took a tumble from the previous season. Pujols’ “fall” was not as big as the others but he also was playing during the Silly Ball era. And we certainly need to keep the ball in mind when making the 2020 forecasts. Alonso was the right guy in the right moment last year, a guy with impressive power playing with a ball that was primed to leave the park. Will MLB feature the same ball in 2020?

Perhaps because of that, McGwire becomes the most interesting comp. His rookie season came in the big offensive year of 1987, the one where Wade Boggs went from 8 to 24 HR, a total he never approached again in his career. Meanwhile, in virtually the same amount of playing time in 1988, McGwire hit just 65% of the HR he did the year before.

So, what do the computer projections expect from Alonso in 2020? Here are the three we currently have available:

Steamer is a tiny bit bearish, relatively, on the SLG forecast but otherwise these are pretty much in agreement on what to expect, which seems a little odd for a player with so little MLB experience.

To me the big question is how Alonso reacts when he doesn’t hit HR at the pace he did last season. Does he expand the strike zone in an effort to swing at any pitch he think he can club, regardless of if it’s a strike? Or does he confidently take walks and be content with good contact on pitcher’s pitches? My feeling is that there’s more room for AVG/OBP growth than the computers expect.

Alonso hit 27 HR at home and 26 on the road. But other than that, his numbers were all significantly better on the road. That’s not a huge surprise. But it’s certainly possible that Alonso can better his 2019 home BABIP of .217 in this upcoming season. With that thought in mind, here is my completely biased prediction for 2020:

You’ll have more credibility if you chime in now with what you think Alonso will do this year. These projections will run once or twice per week from now until the start of the regular season. Next up to undergo the forecast microscope will be Jacob deGrom.