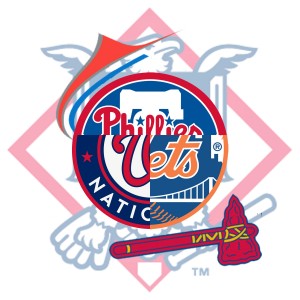 We’ve been so busy picking apart the Mets roster this off-season, we’d be remiss if we didn’t take a broader look at our division rivals to see how we measure up. Unlike other divisions, the NL East does not have a doormat team. The Marlins might not be a playoff favorite, but they’ve got more talent than any other projected fifth place finisher in either league. And, as you’ll see, they’re the least of our concerns. Here’s your annual NL East preview.

Weaknesses: The bottom of the lineup is potentially weak as the team is waiting for Austin Riley to establish himself at third and crosses its fingers that the young speedster Christian Pache can take over for the light-hitting Ender Inciarte in center field. Speaking of crossing fingers, as of this writing, the team does not have a proven catcher to back up the ever fragile Travis d’Arnaud. Ozuna can hit, but is a liability in the field and there’s no DH this year.

Best Case: Pache and Riley breakout, giving the Braves are strong lineup to support their pitching and they win a fourth consecutive division title.

Worst Case: Ozuna makes errors, d’Arnaud gets hurt, Riley is a bust, Pache isn’t ready and the pitching isn’t good enough to carry them beyond .500.

Strengths: Sandy Alcantara and Sixto Sanchez lead a new wave of young rotation arms that are developing faster than expected. With so many great third basemen, you don’t hear much about Brian Anderson, but he’s a good ball player. Speedy, young outfielders will track down balls in the gap. Starling Marte is still on this team.

Weaknesses: The bullpen is largely unproven and the lineup lacks a real threat.

Best Case: Some of the other young arms like Pablo Lopez, Nick Neidert and Elieser Hernandez develop and the team fights and scratches to a .500 record.

Worst Case: The Marllins get off to a slow start in a competitive division and trade away Marte at the deadline before sinking to last place.

Strengths: The strongest lineup this team has had since 2006 features power, speed, contact and balance. Adding a dynamic offensive player like Francisco Lindor to an already good lineup is scary for other teams. Jacob deGrom is without question the best pitcher in the game. A solid and versatile bench and some extra rotation arms should help the Mets overcome the usual injuries. They’ll get a jolt in early June when Noah Syndergaard returns.

Weaknesses: Outfield defense. Starting the season with three of our best pitchers on the IL. A poor fielding third baseman. Question marks in middle relief.

Best Case: Those three pitchers return to health and the Mets find another reliable bullpen arm or two among who’s currently on the roster or available at mid-season. With this high octane offense, the pitching doesn’t need to be great, just good and reliable for them to make the playoffs. If Syndergaard comes back strong, this team could win the division and advance in the playoffs.

Worst Case: Syndergaard, Seth Lugo and Carlos Carrasco don’t all make it back and the pitching staff struggles.

Strengths: A good lineup with six of their regulars capable of hitting 20+ homers. A strong top of the rotation.

Weaknesses: The bullpen was terrible last year and Archie Bradley won’t be enough to fix it. The backend of the rotation looks like a problem.

Best Case: Howard has a big rookie year to give the Phillies four capable starters and the lineup stays healthy and keeps the team above .500 til the trade deadline when they bring in some reinforcements for the bullpen.

Worst Case: Zack Wheeler or Aaron Nola gets injured or Zack Efflin comes back to earth and the pitching proves too thin for this team to be competitive.

Strengths: Rotation is one of the best with 3-time Cy Young winner Max Scherzer, Stephen Strasburg, and Patrick Corbin. Veteran Jon Lester is first in line to fill out the backend with Erick Fedde, Austin Voth and Joe Ross competing for starts. The addition of Brad Hand should strengthen what should be a solid bullpen. Juan Soto is an absolute monster and Trea Turner is an All Star at shortstop.

Weaknesses: Soto will get walked 150 times as his only protection is Josh Bell. The rest of the lineup besides those two and Turner is hardly imposing. This team hasn’t replaced the departed Harper and Anthony Rendon and can’t consistently score runs. They have too many players than can field but not hit and vice versa.

Best Case: Kieboom develops, Victor Robles starts hitting, and Kyle Schwarber stays healthy and adds thump to the lineup. The key pitchers avoid the IL and this team can battle for a wild card.

Worst Case:  Too many errors in the field, too many runners stranded on base and not enough health among an aging pitching staff.