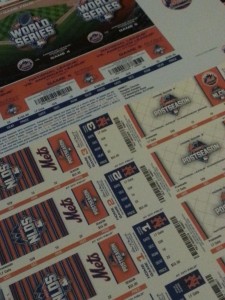 The eagle landed yesterday. Your intrepid columnist had received an e-mail before the weekend that his tickets for the Mets’ postseason – it’s still hard to believe the words “Mets” and “postseason” are strung together this year – series had been shipped. Possession of a partial season plan – nine Friday nights, plus Opening Day – provided an online purchase window, prior to the ticket lottery. Opportunistic as I am, I took advantage, in partnership with my seatmate. It was tough to fathom that getting postseason ducats could be that easy, but it was. God bless the Citi MasterCard! Considering the hoops through which it was required I jump back in aught-six, this was a breeze.

These tickets grant access to every possible game at Citi Field, and even a couple that are now impossible, such as a divisional-lead play-in game – take that, Washington – and the one-game Wild Card round. It’s always good to have one’s bases covered, no? The fact that these were received post-clinching removed the possibility of them being a soul-crushing symbol of yet another abject, late-season failure – I had tickets for everything in 1998, too, and look how that turned out. There were trembling fingers as I opened the UPS envelope, taking care not to put a single nick in any corner of these babies. I carefully slid the sheets out of the bubble-pack and just… admired them. Think of it: actual World Series tickets containing the Mets’ logo!

The mind soared with possibilities. Making sure all the cold-weather Mets gear is in good working fettle, rejoicing that it’s being used after April. Working out logistics as to what time work gets packed up and making the suicidal dive into New York rush-hour traffic. Picturing Yoenis Cespedes roping line drives off the spacious Citi Field left field fence. Thinking of Lucas Duda finding far corners of the Pepsi Porch with horsehide missiles. Imagining Jacob deGrom and Noah Syndergaard striking out Adrian Gonzalez and inducing double plays from Joc Pederson. And maybe thoughts lengthen, out to an imagined NLCS vs. the Cardinals, Pirates or Cubs. Never mind the regular season results between the Mets and the NL Central: the playoffs are an entirely different neighborhood.

A Cards series would be a toe-to-toe brawl, a set against the Pirates would be a battle between arguably the two most “complete” teams in MLB. As for the Cubs…could you imagine how epic a Mets/Cubs series would be? The Mets’ stable of stout young arms facing the Cubs’ stellar array of young position players, each more impressive than the last? The ghosts of 1969 and 1984 present and palpable and hovering over everyone’s shoulders? Heck, a series like that might even summon up John McGraw, Christy Mathewson, Three-Finger Brown and Johnny Evers, for that matter – though we in New York would prefer no hint of Fred Merkle.

Who could have thought the mere opening of an envelope could be so fraught with omen and portent? It’s going to be a long wait until October 9.

8 comments on “The indescribable thrill of receiving Mets playoff tickets”