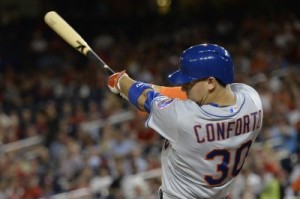 Just shy of the trade deadline last year, amidst offensive struggles that led to comparisons to the historically bad 1962 team, the Mets called up their top outfield prospect Michael Conforto. It was an attempt to resuscitate a lineup decimated by injuries and plagued by poor performance, but it seemed to be a move they were extremely hesitant to make. This regime, of course, is extremely methodical in how they choose to move their prospects through the system with rare exceptions. Conforto was certainly one of those exceptions.

As the deadline approached, the team was floundering offensively while trying to keep pace with an under-performing Nationals team atop the National League East. The calls for reinforcements started weeks earlier, with the key name on fans’ and the media’s lips being Conforto. The 22-year-old, literally about a year removed from playing ball at Oregon State, was blazing a trail through the Mets’ farm system destroying baseballs. He made the jump to AA in less than a year, where his stellar performance had him banging on the major league door. The outcry was loud, his performance demanded it, and the timing was on point. It was the perfect storm of events, and the team called him up on July 24th.

Conforto hit the ground running, with some hiccups here and there, but all told he put forth a stellar rookie performance. In just 56 games he slashed .270/.335/.506 with a wOBA of .359 and an wRC+ of 134. That placed him firmly as one of the team’s top offensive performers and most valuable contributors in just over a third of a season. Of Mets hitters with less than 60 games played for the team, his 2.1 fWAR placed him second only behind the monster half of Yoenis Cespedes.

There’s nothing in his numbers that suggests that this was any kind of fluke, either. His walk (8.8%) and strikeout (20.1%) rates were about average and could be in line for further, if slight, improvement in those areas. His line drive rate (22.6%) was slightly above league average, as was his fly ball rate (38.7%), while his ground ball rate (38.7%) was below. A high-end fly ball rate (40+%) is indicative of a power hitter, while a high ground ball rate (50%+) is indicative of a contact hitter. In terms of plate discipline, he was better than average at laying off of pitches outside of the zone (O-Swing 24.3%). His contact rates were also generally average both in the strike zone (87.2%) and in general (79.1%).

Conforto’s percentages show that he fell comfortably “in the middle,” as it were, and his actual results in 2015 reflected that: a player with a solid average, good plate discipline, and good pop. The overall package points to the overall profile of a player the scouting reports suggested Conforto could become: a strong middle-of-the-order presence with 20-25 home runs and the ability to get on base at a high rate. He’s essentially the perfect hitter in terms of what the Mets organization has established as their philosophy during the Sandy Alderson regime, which is power and patience.

Now, we’re talking about 56 games here. It’s a very small sample, but it’s very encouraging to see Conforto get so close to the player he was expected to be in his very first exposure to the majors. His second year will be very telling as he’ll need to make adjustments to the adjustments pitchers make to him on his second go-round.

One of the main questions heading into the 2016 season is playing time. Terry Collins went out of his way to sit Conforto against lefties which, arguably, ended up putting the team in a rough spot in the playoffs. Just as the case was in 2015 after the team acquired Cespedes, it remains to be seen if Conforto or Juan Lagares loses playing time to him. In 2015 it was Lagares that lost the most playing time to Cespedes, and in 2016 chances are that it plays out the same way. Unless, of course, Conforto runs into some kind of sophomore slump.

It will be exciting to see what strides Conforto makes in 2016 considering he had no major trouble as a rookie in getting close to what many deemed his ideal outcome. Does that mean he can, once he gets more experience under his belt, perform at a level higher than even his most positive scouting reports predicted? Possibly, but he’ll need the playing time to do it.

9 comments on “Michael Conforto profiles perfectly for the Mets”